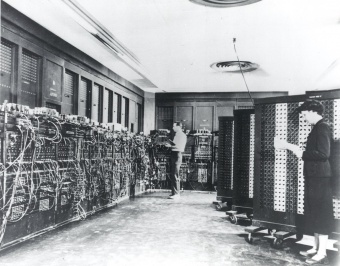 Computers and electronics play an enormous role in today's society, impacting everything from communication and medicine to science.

Although computers are typically viewed as a modern invention involving electronics, computing predates the use of electrical devices. The ancient abacus was perhaps the first digital computing device. Analog computing dates back several millennia as primitive computing devices were used as early as the ancient Greeks and Romans, the most known complex of which being the Antikythera mechanism. Later devices such as the castle clock (1206), slide rule (c. 1624) and Babbage's Difference Engine (1822) are other examples of early mechanical analog computers.

The introduction of electric power in the 19th century led to the rise of electrical and hybrid electro-mechanical devices to carry out both digital (Hollerith punch-card machine) and analog (Bush’s differential analyzer) calculation. Telephone switching came to be based on this technology, which led to the development of machines that we would recognize as early computers.

The presentation of the Edison Effect in 1885 provided the theoretical background for electronic devices. Originally in the form of vacuum tubes, electronic components were rapidly integrated into electric devices, revolutionizing radio and later television. It was in computers however, where the full impact of electronics was felt. Analog computers used to calculate ballistics were crucial to the outcome of World War II, and the Colossus and the ENIAC, the two earliest electronic digital computers, were developed during the war.

With the invention of solid-state electronics, the transistor and ultimately the integrated circuit, computers would become much smaller and eventually affordable for the average consumer. Today “computers” are present in nearly every aspect of everyday life, from watches to automobiles.

STARS articles are peer-reviewed articles on the history of major developments in technology. Available in the computers and information processing category are:

This category has the following 38 subcategories, out of 38 total.

Pages in category "Computing and electronics"

Media in category "Computing and electronics"

The following 15 files are in this category, out of 15 total.

Retrieved from "https://ethw.org/w/index.php?title=Category:Computing_and_electronics&oldid=193861"
This page was last edited on 17 August 2022, at 11:14.
About ETHW
Policies and disclaimers