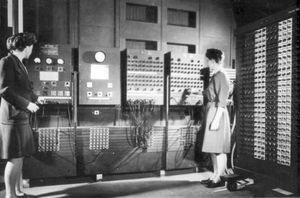 Before the invention of electronic computers, “computer” was a job description, not a machine. Both men and women were employed as computers, but women were more prominent in the field. This was a matter of practicality more than equality. Women were hired because there was a large pool of women with training in mathematics, but they could be hired for much less money than men with comparable training. Despite this bias, some women overcame their inferior status and contributed to the invention of the first electronic computers.

In 1942, just after the United States entered World War II, hundreds of women were employed around the country as computers. Their job consisted of using mechanical desk calculators to solve long lists of equations. The results of these calculations were compiled into tables and published for use on the battlefields by gunnery officers. The tables allowed soldiers in the field to aim artillery or other weapons, taking into account variable conditions such as temperature and air density. Today, such calculations are done instantly in the battlefield with microcomputers.

One place where human calculators were busy at work was the Moore School of Engineering, a part of the University of Pennsylvania in Philadelphia. Dozens of women worked there, cranking the handles on their calculators and producing column after column of numbers. Adele Goldstine and Mary Mauchly, both employees of the university and wives of professors involved in computing, helped recruit and train the women who, early in the war, were usually college graduates with math degrees. Later, high school graduates were used. A few highly trained workers, including one Lila Todd, operated what was called a differential analyzer, a machine that could calculate the path of a shell or bomb as it flew through the air. But engineers such as John Mauchly thought it would be better to design a machine to do other tasks such as calculating ballistic tables, and began working on what became the ENIAC, one of the first electronic digital computers. Some women were hired to assemble the circuits used in the ENIAC, although very little is known about who these women were.

When the ENIAC was nearing completion, six women were chosen from among the human computers to be trained as programmers. These were Kay McNulty, Frances Bilas, Betty Jean Jennings, Elizabeth Snyder, Ruth Lichterman, and Marlyn Wescoff. By this time, it was the autumn of 1945. The war had ended, but the computing program was not cancelled. Instead, the military remained interested in a machine that would calculate complex trajectory equations very rapidly, and support for the project continued. The six women chosen to be programmers devised the very first computer program, which was demonstrated when the ENIAC was unveiled in early 1946. A short time later, all the women were taken off the project when the machine was taken to a military base near Washington, D.C., but several of them found employment elsewhere as programmers, and five of the six are alive as of this writing.

Retrieved from "https://ethw.org/w/index.php?title=Women_Computers_in_World_War_II&oldid=154683"
Categories:
This page was last edited on 12 April 2017, at 13:51.
About ETHW
Policies and disclaimers