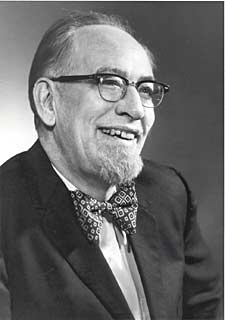 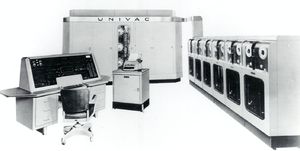 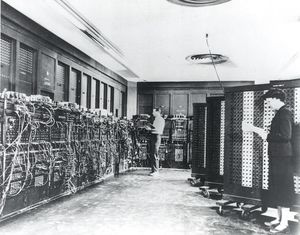 John Mauchly was born 30 August 1907 in Cincinnati, Ohio. His father was a physicist who encouraged his son’s scientific interests. Mauchly began experimenting with electricity at a very young age, even building a flashlight when he was only five years old. He continued to study science and majored in physics in college. In 1930 he married Mary Walzl. Two years later he earned a doctorate from Johns Hopkins University and became a physics professor at Ursinus College near Philadelphia. While teaching at Ursinus, Mauchly became increasingly interested in meteorology. He began to think about a device that would help him do all the necessary mathematical calculations quickly.

During World War II, Mauchly went to the Moore School of Engineering at the University of Pennsylvania to take an electronics course. He found the class fairly easy, but he enjoyed discussing his ideas for an electronic computer with his lab instructor, J. Presper Eckert. Working together, the two of them began to plan and build ENIAC (Electronic Numerical Integrator and Computer) in 1943 under an army contract. At the time that he worked on ENIAC, no one in the world of mathematics research had ever even heard of Mauchly. Although the project took several years and was not completed before the war ended, Mauchly and Eckert were sure there were other uses for computers.

In 1946, after Mauchly’s first wife died, he and Eckert started a new business, the Electronics Control Company, later renamed the Eckert-Mauchly Computer Corporation. The company was always in financial difficulty, especially after a National Research Council committee recommended in 1948 that the U.S. National Bureau of Standards not support Mauchly and Eckert’s proposal to make and sell electronic computers. However, in 1952 the duo’s UNIVAC (Universal Automated Computer) made history when it forecast the outcome of the presidential election based on a small sample of early returns. Mauchly, remarried to Kathleen McNulty, continued to work on computers even after the Eckert-Mauchly Computer Corporation was absorbed by Remington Rand Corporation. In 1959 he set up his own company, Mauchly Associates, and helped make computers widely accepted tools for business, government and science. Recognized as a computer visionary, Mauchly died during heart surgery in 1980.

Retrieved from "https://ethw.org/w/index.php?title=John_W._Mauchly&oldid=146370"
Categories:
This page was last edited on 1 February 2016, at 19:19.
About ETHW
Policies and disclaimers