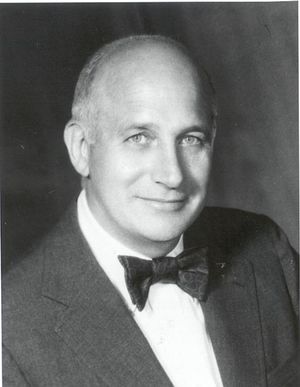 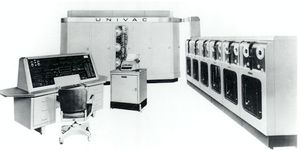 J. Presper Eckert, Jr., was born in Philadelphia, Pennsylvania in 1919. His wealthy family tried to push him towards a business career, but he was always interested in science. At the age of twelve, he won a science fair with a magnetized boat that he invented. Although his parents eventually agreed to let him study science, he was not allowed to go to college where he wished at MIT. Instead, he stayed close to home and attended the Moore School of Engineering at the University of Pennsylvania. While working as a lab instructor there during World War II, he met John Mauchly and became very enthusiastic about building the computing machine that Mauchly discussed with him. Eckert helped Mauchly convince the Moore School to let them build their electronic computer there.

As a military project, ENIAC (Electronic Numerical Integrator and Computer) was top secret. This secrecy became a problem when Eckert was nearly drafted into the army. The government had to step in to keep him at the Moore School, since the draft board had no way of knowing how important his work was for the war effort. After World War II ended, Eckert and Mauchly began to work on EDVAC (Electronic Discrete Variable Automatic Computer), which featured a stored-program memory. They were forced to leave the Moore School to build EDVAC because the University of Pennsylvania insisted on taking over all the patent rights for the computers.

In scientific and engineering terms, Eckert and Mauchly were very successful. Their UNIVAC (Universal Automated Computer) used magnetic tape instead of punch cards, which greatly increased the speed of calculations. However, Eckert and Mauchly were both better scientists than businessmen, and the company they founded, the Eckert-Mauchly Corporation, did not remain independent. It was absorbed by the Remington Rand Corporation, an early competitor with IBM for the computer market. Eckert was a star engineer at Remington Rand until he retired. He died of leukemia in 1995.

Retrieved from "https://ethw.org/w/index.php?title=J._Presper_Eckert&oldid=146145"
Categories:
This page was last edited on 29 January 2016, at 15:37.
About ETHW
Policies and disclaimers