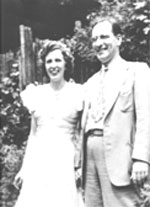 Kathleen “Kay” McNulty was one of a small number of women employed as human “computers” during World War II and later went on to become one of the first women programmers.

McNulty was born 12 February 1921 in County Donegal, Ireland. Her father, a former officer with the Irish Republican Army, came to the United States in 1924 and set up a stone plant in Pennsylvania. Kay, who spoke only Gaelic, learned English and eventually attended Chestnut Hill College in Pennsylvania, where she was one of three women to graduate with a degree in mathematics in 1942. That year she became one of about 75 women employed during World War II as human “computers” by the University of Pennsylvania’s Moore School of Engineering. As “computers” McNulty and the other women calculated tables of numbers that would be used by soldiers in the field to aim artillery shells.

McNulty described life as a “computer”: “We did have desk calculators at that time, mechanical and driven with electric motors, that could do simple arithmetic. You’d do a multiplication and when the answer appeared, you had to write it down to reenter it into the machine to do the next calculation. We were preparing a firing table for each gun, with maybe 1,800 simple trajectories. To hand-compute just one of these trajectories took 30 or 40 hours of sitting at a desk with paper and a calculator. As you can imagine, they were soon running out of young women to do the calculations.”

The frustrations and the time-consuming nature of creating these tables encouraged John Mauchly and other Penn engineers to look for ways to make sophisticated electronic computers to the same thing as their human counterparts. He and colleague J. Presper Eckert eventually unveiled the pioneering ENIAC computer, which put McNulty and the other women computers out of work.

McNulty was one of the six women chosen to become the first computer programmers. The women initially were not allowed to work in the same room as the machine because of the secrecy of the computing project, so they had to do all their programming on paper and test it on the computer later. Much of this earlier programming was still related to solving complex mathematical problems, and McNulty worked with the others to break down long equations into single operations that the computer could perform in sequence. Yet when ENIAC was announced to the public, the work of the programmers was not mentioned, so few people knew of their important work.

McNulty married John Mauchly in 1948 (after his wife accidentally drowned at the New Jersey shore), bore him five children, and stayed with him until he died in 1980. She married photographer Severo Antonelli a few years later. In 1986, the Letterkenny Institute of Technology, near where McNulty was born, honored her with the establishment of a medal in her name given to a computer science student each year.

Retrieved from "https://ethw.org/w/index.php?title=Kathleen_McNulty&oldid=146455"
Categories:
This page was last edited on 2 February 2016, at 18:56.
About ETHW
Policies and disclaimers