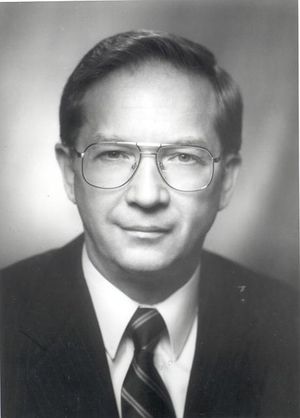 Dr. Emerson Pugh is the author or co-author of a college physics text and several books on the history of IBM and the information processing industry. After receiving his Ph.D. in physics from the Carnegie Institute of Technology in 1956, Dr. Pugh worked for IBM for 35 years in a variety of capacities, including research scientist, product development manager, and corporate executive.

Dr. Pugh is a Fellow of the IEEE, the American Physical Society, and the American Association for the Advancement of Science. He was IEEE President in 1989, and president of the IEEE Foundation from 2000 to 2004.

Emerson served on the IEEE History Committee, and in 2009, he created the STARS program with the IEEE History Center, an online compendium of invited, peer-reviewed articles on the history of major developments in electrical and computer science and technology.

Polio and Education, an account of Pugh's early life

Retrieved from "https://ethw.org/w/index.php?title=Emerson_Pugh&oldid=179950"
Categories:
This page was last edited on 20 May 2020, at 16:42.
About ETHW
Policies and disclaimers