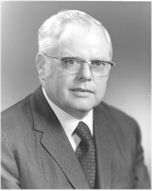 James Hillier, who retired as Executive Vice President and Chief Scientist of RCA in 1977, made significant contributions to electronics in what might be termed two separate careers-in research and in research management.

After completing his graduate studies, Dr. Hillier was hired into RCA by Dr. Vladimir K. Zworykin in 1940. During this first phase of his career, his research centered on the electron microscope. Working with a small group and continuing work he had begun in graduate school, he shortly built RCA's first commercial electron microscope. Dr. Hillier combined his refinement of the microscope with an extensive medical research program, developing specimen preparation techniques and guiding biologists in the interpretation of the micrographs they obtained, and in 1960 he received the American Public Health Association's Albert Lasker Award in Medical Research for that work. In addition, in 1980 he was inducted into the U.S. National Inventors Hall of Fame for his electron microscope developments.

During his tenure as head of RCA Laboratories, the major research developments included the electron optics that led to the 90° deflection, rectangular, 25-inch color kinescope; the Electrofax process for copying printed matter; the MOS transistor and complementary symmetry MOS (CMOS) circuits, and the technology that RCA is using in its "SelectaVision" VideoDisc system, the first major RCA electronic consumer product since color television.

He also gained recognition for his work in this part of his career. In 1967, he received the IEEE David Sarnoff Award for, in part "...his accomplishments as a research director and his inspiration to scientists-young and old." The Industrial Research Institute Medal was awarded to him in 1975, "For exemplary leadership in the management of the central research laboratories of one of our nation's largest and most dynamic electronic information companies."

Dr. Hillier, who wrote more than 100 technical papers and was granted 41 patents, was a Fellow of the American Physical Society, the American Association for the Advancement of Science, the Institute of Electrical and Electronics Engineers, an Eminent Member of Eta Kappa Nu, and a member of Sigma Xi and the National Academy of Engineering. He was also a member of the Advisory Council of the College of Engineering at Cornell University.

Dr. Hillier was awarded the 1981 IEEE Founders Medal "For original contributions in electron microscopy and leadership in fostering a creative laboratory environment." Dr. Hillier and his wife, the former Florence Bell, had two sons, J. Robert and William W. Hillier. Dr. Hillier passed away on 15 January 2007 in Princeton, New Jersey.

Retrieved from "https://ethw.org/w/index.php?title=James_Hillier&oldid=146200"
Categories:
This page was last edited on 29 January 2016, at 17:46.
About ETHW
Policies and disclaimers