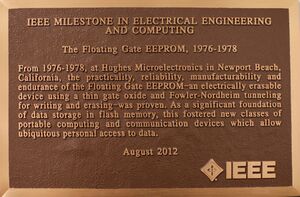 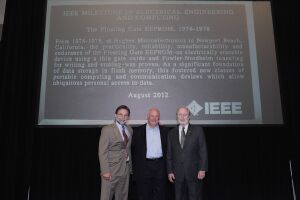 From 1976-1978, at Hughes Microelectronics in Newport Beach, California, the practicality, reliability, manufacturability and endurance of the Floating Gate EEPROM -- an electrically erasable device using a thin gate oxide and Fowler-Nordheim tunneling for writing and erasing -- was proven. As a significant foundation of data storage in flash memory, this fostered new classes of portable computing and communication devices which allow ubiquitous personal access to data.

EPROM, EEPROM, Flash EEPROM, NOR Flash and NAND Flash are non-volatile memory technologies that were introduced between 1970 and 1987.

While at Hughes Microelectronics, Eli Harari showed that thin SiO2 films (of about 100 Å) were an efficient and reliable electron conduction mechanism for both program and erase, and in fact allowed for the electrically-erasable floating gate EEPROM in 1976 (Ref. 3) as compared with the ultra-violet-erasable floating gate EPROM of 1970. The importance of this discovery continues to this day with thin SiO2 film being an essential characteristic of both NOR Flash and NAND Flash.

Eli’s 1977 JAP paper (Ref. 2, published in 1978) showed that the 1976 EEPROM was reliable, manufacturable, highly efficient and had high durability.

Eli’s EEPROM invention used Fowler-Nordheim tunneling for both write and erase operations. NOR Flash adopted use of hot electron injection for Write operations, but NAND Flash’s use of low current Fowler-Nordheim tunneling proved to be five to six orders of magnitude more efficient than NOR Flash. While NAND was initially considered a niche product since its serial access was considered inferior to NOR’s random access, this serial characteristic gives NAND a block storage property like that of a disk drive. NAND is thus more easily usable for data storage, and it also provides a denser and more scalable medium than NOR Flash.

The historic significance of the (1) thin film and (2) Fowler-Nordheim tunneling usage discoveries in 1976 and 1977 can be summarized as follows:

The above foundation led to Harari recognizing that Data-Store applications were far less forgiving than Code-Store. Data-Store applications were totally intolerant of any error-bits occurring during multiple write/erase cycles or after long-term data retention. Unlike other memories such as SRAM and DRAM, random Flash cells would begin to wear out and eventually break down or lose their stored charge during years of field operation.

If very large Flash memory arrays containing billions of Flash EEPROM transistors were to meet zero bit-error reliability levels, it was not sufficient to apply error correcting code (ECC) and spare/redundant rows and columns blown in the factory, the techniques commonly employed in 1988. Harari reasoned that what was required was a holistic "System Flash" solution that would accompany the Flash EEPROM through its entire lifetime.

Harari proposed a radically new block-oriented Flash memory array architecture, working cooperatively with a sophisticated intelligent controller. This architecture would manage, detect, and correct or replace any and all defective cells, either before failures occurred or as soon as such failures were detected. What resulted was the invention of SanDisk's System Flash. This was an approach that was later adopted by the entire Flash Data-Store industry, including virtually all of today's Flash cards, USB Flash drives, embedded Flash, managed NAND and SSDs.

While NOR Flash adopted use of a thin SiO2 gate dielectric, its use of hot electron injection for Write operations proved to be five to six orders of magnitude less efficient than Fowler-Nordheim tunneling. This choice was dictated for NOR Flash somewhat because it sought compatibility with EPROM, whose random access was optimized for storing micro-code since it rarely required multiple Write/Erase cycles. NOR Flash was an easy design-in for EPROM and gained early success in the market.

By contrast, the high efficiency provided by Fowler-Nordheim tunneling allowed NAND Flash to be optimized for data storage, a usage that required multiple frequent Write/Erase operations of blocks of data. The enablement of hard disk emulation by way of the “System Flash” invention (Ref. 6) allowed NAND Flash to begin to displace hard disk storage, and to allow for data storage in very small low-power devices. Harari’s multistate flash invention (Refs. 4 and 5) allowed for large price savings and greater density, thereby speeding the adoption of NAND Flash.

NAND Flash's adoption of Fowler-Nordheim tunneling gave it the winning hand in overtaking NOR Flash and thereby dominating the Flash market since early in the current millennium. NAND Flash is now ubiquitous around the world, having enabled portable electronics in numerous areas including digital photography, digital music, smart phones and tablet computing.

The Foundation of Flash Memory -- By exploring much thinner SiO2 films in the 100 Å range at Hughes, Eli Harari showed that, under high electric field conditions, electron conduction through these films was an efficient and reliable mechanism for both program and erase. This change from the 700-1000 Å thickness used in the 1970 ultra-violet-erasable floating gate EPROM was critical to the success of the 1976 electrically-erasable floating gate EEPROM. The importance of this discovery continues to this day with this thin SiO2 film having always been an essential characteristic of both NOR Flash and NAND Flash.

Harari also showed that the phenomenon responsible for the efficiency and reliability of these much thinner SiO2 films was indirect tunneling from the silicon conduction band to the SiO2 conduction band, a quantum mechanical effect known as Fowler-Nordheim tunneling which was first discovered by Fowler and Nordheim many years earlier. This mode of conduction was important because 100 Å films of SiO2 would support long-term retention of electrons trapped on a floating gate. This is in sharp contrast to the 25-30 Å films of SiO2 that were employed in earlier days in MNOS/SONOS for direct tunneling of electrons from the silicon conduction band into interface traps, and which were generally unreliable and incapable of long-term retention of trapped electrons. The importance of Fowler-Nordheim tunneling has been fundamental to the success of NAND Flash, as compared with the use of hot electron injection in the far less popular NOR Flash.

The Evolution of Flash Memory -- In 1989, “System Flash” overcame the unreliable nature of flash memory with a technique that created a long-term non-volatile medium that could be reliably rewritten, and which included the ability to remap and replace defective and “worn out” cells with substitute cells.

While NAND was initially considered a niche product since its serial access was considered inferior to NOR’s random access, this serial characteristic gave NAND a block storage property like that of a disk drive. This resulted in SanDisk's controversial decision to transition from NOR to NAND in the late 1990s, a move that resulted in lower cost, scalability, and the ability to support massive parallelisms in program (write) and erase operations. Cost reductions were accelerated through the successful commercialization of 2 bits-per-cell (X2) and 3 bits-per-cell (X3) multistate NAND technology.

The ability of products implementing “System Flash” to emulate random access disk sectors allowed them to be a direct replacement for magnetic storage. Their compact size and low-power filled a niche that could not be filled by disk drives, and high volumes have allowed advances in NAND flash memory to outpace Moore’s Law.