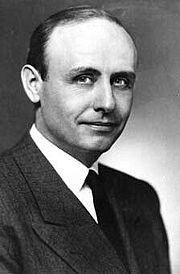 Cuthbert Corwin Hurd was an American computer scientist and entrepreneur, who was instrumental in helping the International Business Machines Corporation develop its first general-purpose computer.

He started working as mathematician at the atomic energy facility in Oak Ridge, Tennessee, where he taught and served as a technical research head. From 1949 to 1962 he worked at IBM, where he founded the Applied Science Department and pushed reluctant management into the world of computing. Hurd later became director of the IBM Electronic Data Processing Machines Division.

After 1962 he served as chairman of the Computer Usage Company, the first independent computer software company, until 1974 when he formed Cuthbert C. Hurd Associates. From 1978 to 1986, Hurd served as chairman for Picodyne Corporation. Hurd was a founder, president, and chairman of Quintus Computer Systems from 1984 until October 1989 when Quintus was acquired by Intergraph.

In 1986 Cuthbert C. Hurd received the Computer Pioneer Award by the Computer Society for his contributions to early computing.

Hurd joined I.B.M. in 1949 as its director of applied science. At Oak Ridge he had have experience dealing with the installation of an IBM 602 to start the data handling problems. He joined the staff of IBM to evaluate the combination of the 603 and the 405. A year later Hurd and James Birkenstock recommended that the company design and build a general-purpose computer, bearing the heavy expense itself so that I.B.M. would own the patents. Hurd was a key advisor to Thomas Watson on the development of the machine.

Tom Watson was president of IBM. He directed the IBM engineering and research organization to develop what became the Defense Calculator (701), and his early recognition of the need for mass-produced electronic computers speeded the development of the 701.

Hurd assessed military computing requirements and was instrumental in applying those requirements to a single machine. The new machine, the IBM 701, cost $3 million to develop and was introduced in 1952, putting I.B.M. on the path to becoming the dominant force in the computer industry. Hurd had enabled the company to enter new technical markets that had been created by federal research and defense expenditures. Hurd went on to help develop several other I.B.M. computers.

Retrieved from "https://ethw.org/w/index.php?title=Cuthbert_Hurd&oldid=145509"
Categories:
This page was last edited on 20 January 2016, at 19:39.
About ETHW
Policies and disclaimers