Milestones:Introduction of the Apple II Computer: 1977-1978

The Apple II spurred software and hardware suppliers to help create the worldwide personal computing industry. It was the first low-cost computer to offer quick start-up, pre-addressed standard expansion slots, processor RAM-based bit-mapped NTSC color graphics and random access storage in a handsome compact package. It had an economy of design with a BASIC interpreter and assembler in ROM as well as gaming and graphics features.

TBD, but in the vicinity of the main entrance or the main lobby of the headquarters of Apple, Inc., in Cupertino, CA.

The main entrance and the main lobby of the headquarters of Apple, Inc., at 1 Infinite Loop, Cupertino, CA, are fully accessible to the public.

The Apple II computer was the first widely successful personal computer. Introduced in 1977, it included bit-mapped graphics, viewable on a standard NTSC color television,(Ref. 1) eight slots for expansion cards, and a BASIC language interpreter and mini assembler that executed out of . The NTSC television data resided in the computer’s main memory, so blocks and pixels could be altered in microseconds without the need for a slower serial bus. Game paddles and sound were supported in the hardware, and the BASIC interpreter had game and graphics extensions tailored to the hardware. An important design feature was use of a switching power supply to reliably power up to eight expansion cards. These hardware and software features were packaged in a handsome case with a built-in keyboard, and a magnetic cassette interface to allow for cassette storage of programs and data.(Ref. 2)

The computer was a true “garage operation.” Co-founders Steve Jobs and Steve Wozniak borrowed money from friends to fund component and assembly costs in order to manufacture the product, initially out of the garage at the Los Altos, home of Steve Jobs and his parents. The resulting company established the first retail personal computer sales channels, and the resulting popularity of the product resulted in the growth and development of the personal .

in 1978, Apple introduced the Disk II, a 5 ¼” floppy disk drive with an expansion slot controller card that effectively supplanted its original cassette tape drive. It was a design marvel of Apple co-founder Steve Wozniak’s in that it used just six low-cost chips as compared with the dozens of chips used by other floppy disk controllers that were then on the market. The six chips required special software that was included in the Apple DOS operating system in order to perform all of the operations necessary to fully support a fully functional floppy disk drive. The software was streamlined to run in a small footprint of the machine’s limited memory space.

The Apple II with its unique floppy disk subsystem quickly became a popular platform for hobbyists and game creators, as well as for educational, research and business applications.(Ref. 3) The computer’s combination of software and hardware defined the general design and operation of all subsequent machines within the new personal .

What set the Apple II apart from all of its predecessors was the fact that it was a complete system: it consisted of built-in input (keyboard, cassette interface, and game paddles), built-in output (bit-mapped color graphics, sound and cassette interface), and built-in software that executed out of (monitor, BASIC interpreter and mini assembler). All of these components were included in a small, portable and attractive form-factor case that was usable with a standard color television set, and yet it was easily and inexpensively expandable.

The NTSC color generation circuitry was subdivided for DRAM timing and processor timing using very few chips. Graphics displayed on the television screen were updated at processor speeds, due to every screen element being in memory. RAM refreshes were the result of constant video display accesses on the RAM.(Ref. 4) Color animated arcade games were easy to create for the Apple II, and as a consequence the computer game industry began.

The motherboard was expandable from 4KB to 48KB, and its eight expansion slots for Z80-based cards allowed for upgrades from Apple and third parties. The phenomenal growth of the expansion card industry was due in large part to the fact that the cards was very easy to create – they only required a few chips to interface with the slot since most of the decoding circuitry was on the motherboard itself. In addition, thanks to a unique design from Allen Baum, each card had firmware space pre-decoded so that its driver could reside on the expansion card itself. The most popular expansion cards included memory expansion beyond 48 KB, software emulators, video cards, process accelerator cards, and peripheral interface cards.

The Apple II computer was the first broadly successful personal computer, and it helped to create the personal , and future generations of microcomputer- based consumer electronic products.(Ref. 5) 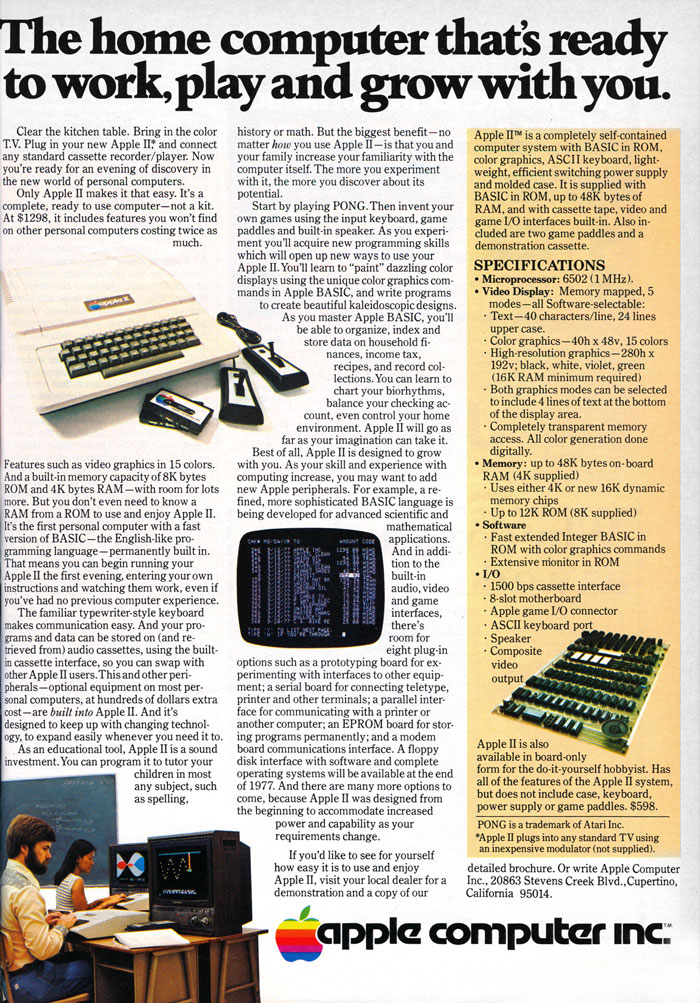