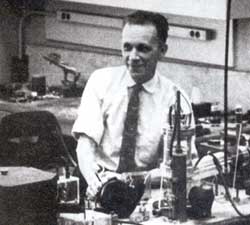 The invention of the transistor is largely credited to Walter Brattain, John Bardeen, and William Shockley. But, like most great inventions, the transistor was a milestone in a creative process that involved many people. One of those people was Russell Ohl, who, in 1940 stumbled on the semiconductor “p-n” junction diode, the device that Bardeen described as fundamental to the work of the team that built the transistor.

Russell Ohl was born in January 1898, near Allentown, Pennsylvania. An extremely bright student, he entered public school at the age of five and went on to what became Pennsylvania State University at age 16. It was in his sophomore year in college that Ohl saw a radio receiver for the first time and heard his first “broadcast”—the SOS from a ship at sea that was being attacked by a German submarine. He was intrigued, but it wasn’t until a year later, when he took a course on electron tubes, that his lifelong passion for radio really began.

After graduation, Ohl served a brief stint in the Army Signal Corps, taught for a while, and then went to work, first at Westinghouse, then AT&T and finally, in 1927, at Bell Labs in Holmdel, New Jersey. It was through Ohl’s work with radio that he became interested in semiconductors.

In the 1920s radio tuners were only able to receive the relatively low frequencies used for broadcasting. Cutting edge research of radio technology was exploring frequencies above the broadcast band, the frequencies that would later be used for FM, television, microwave communication, and radar. Unfortunately, electron tube transmitters and receivers tended to function poorly at these high frequencies. Ohl wanted to create an improved receiver for high frequencies using semiconductor “detectors,” which were known to outperform electron tubes at these frequencies. Despite reservations among the Bell Labs management, Ohl’s quest eventually led him to experiment with new forms of semiconductor materials such as germanium and silicon.

Samples of semiconductors were refined in small vessels and allowed to cool. Then the crystallized ingot would be removed, cut into slices or slabs, and used for experiments. In 1940 Ohl was working with a silicon sample that had a crack down its middle. He was using an ohmmeter to test the electrical resistance of the sample when he noted that when the sample was exposed to light, the current that flowed between the two sides of the crack made a significant jump. It was known that other semiconductors, such as selenium, generated a small current when exposed to light, but the cracked silicon sample was quite a curiosity. Ohl showed the sample to his colleagues and together they deduced that the crack was a fortunate accident: It marked the dividing line that had occurred when the molten silicon froze in the crucible. At that moment, various impurities or contaminants in the silicon had been isolated into different regions, with the crack separating them. As a result, the silicon atoms in the region on one side of the crack had extra electrons around them. The other region was the opposite; its crystallized silicon had a slight shortage of electrons. They named the two regions p and n—p for positive-type and n for negative-type. The barrier between the impurities was called the p-n junction. The junction represented a barrier, preventing the excess electrons in the n-region from traveling over to the p-region, where atomic forces naturally drew them.

But when light struck the sample, that situation changed. The light carried energy into the silicon and then, because of the p-n structure electrons, tended to flow across the junction. The effect was a simple device that converted sunlight to electrical energy. Ohl had invented the silicon solar cell. Unlike the earlier selenium solar cells, which consisted of just a sample of regular selenium, the silicon cell with its p-n junction converted sunlight much more efficiently. So efficiently, in fact, that for the first time it was possible to use solar cells to power electronic equipment. AT&T, which had various types of communication equipment in operation in rural areas with limited access to electric power, immediately saw the value of this invention. A group of solar cells, linked together into a solar battery, was put in service to power a small electronic circuit, which was mounted directly on a telephone pole.

For the next decade and a half Ohl continued to work in solid-state physics at Bell Labs. In 1955 he was elected a fellow of the Institute of Radio Engineers (a predecessor of the IEEE). Three years later, feeling that his laboratory work wasn’t what it had once been, Ohl retired at age 60. Soon thereafter he moved his family to California, but continued working and publishing papers about semiconductor crystals. He also developed a strong interest in plants and studied botanical “nervous systems” to see how they were affected by noise. Although Ohl made fundamental discoveries leading to the more famous transistor, his invention of the semiconductor junction has largely been forgotten. Ohl died in March 1987.

Retrieved from "https://ethw.org/w/index.php?title=Russell_Ohl&oldid=147076"
Categories:
This page was last edited on 25 February 2016, at 19:08.
About ETHW
Policies and disclaimers