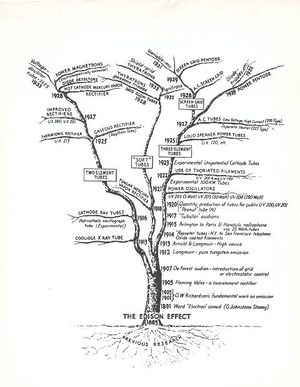 An electron tube (also known as a 'Vacuum tube', or a 'Valve' ) is a glass or metal enclosure in which electrons move through the vacuum or gas from one metal electrode to another. The vacuum tube is often used to amplify weak currents or act as a one-way valve (rectifier) for electric current.

Before the 1947 invention of the transistor the electron tube was the basis of virtually all electronic devices. The simplest kind of electron tube is the diode, which was invented in 1904 by John A. Fleming. In Greek, “di” means “two,” and it was called a diode since it only had two electrodes inside—the negative electrode or “cathode” and the positive electrode or “anode.” Fleming’s diodes were modified light bulbs, so like light bulbs they consisted of a glass bulb with a filament inside. The filament acted as the cathode, emitting large numbers of electrons, while the anode consisted of a small metal plate mounted near the filament and connected to the outside of the tube by a thin wire.

A diode regulates the flow of electric current and acts like a one-way valve turning current on and off. When a battery is connected to the metal cathode, it heats up and electrons “boil off” from its surface. They fly around inside the glass tube and form an invisible cloud around the cathode. When the diode is placed in a circuit so that the anode is connected to the other terminal of the battery, the cloud of electrons rush toward the anode, as do the new electrons streaming off the cathode. This flow of electrons completes the electric circuit. It is extremely difficult for electrons to flow the other way, so the diode acts as a one-way valve.

Fleming invented the diode for use in radio. One of the most difficult things about receiving radio ways was “detecting” the signal. Mechanical devices had been used to detect the presence of incoming radio waves, but the waves are so weak that they don’t have enough energy to move even a very lightweight mechanical detector. With a Fleming diode and a carefully designed tuning device, radio waves could be detected when they acted on the diode, causing it to turn on or off. The diode was a very sensitive, “electronic” type of radio wave detector. 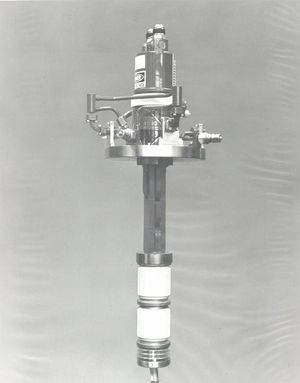 A more versatile type of electron tube is the triode, or three-element tube, invented by Lee De Forest in 1906 (his brand name for it was the Audion, but it came to be known as the triode). In a triode, current can be all-the-way-on, all-the-way-off, or anything in between—like water coming out of a faucet. In a triode the strength of the current, like the flow of the water, can vary. The triode is able to do this by using a tiny wire grid placed between the cathode and the anode to form the third electrode, simply called the grid. A voltage sent to the grid—such as a radio wave, or the weak signal from a microphone—controls electron flow. If the grid is positively charged, it helps accelerate the electrons across the gap between the other two electrodes. If the grid is negatively charged, then it repels electrons and greatly reduces or stops the flow across the gap. The grid makes the triode a much more versatile device than the diode. Especially important is the triode’s ability to amplify small currents. For example, while a Fleming diode could detect the presence of radio waves, the waves were still very weak. A triode electron tube could not only detect them, but also amplify them. That helped make it possible to transmit and receive not only the on/off signals of Morse Code, but also voice and music.

Lee De Forest and other inventors worked for many years to improve the Audion triode. However, the amplification provided by the earliest Audions had a downside—a loud howl known as “feedback.” Feedback happens when output from the triode is unintentionally sent back to the grid, is amplified again, fed back to the input, is amplified again and so on and so on until it overloads the circuit. When that happens, the tube begins to generate its own waves, which create the howling. De Forest tried to fix the Audion so that there was no feedback. Other inventors, however, thought the feedback might be valuable and searched for ways to make use of it. Eventually, engineers discovered that the waves generated by a triode could be used to make radio transmitters and other useful devices. 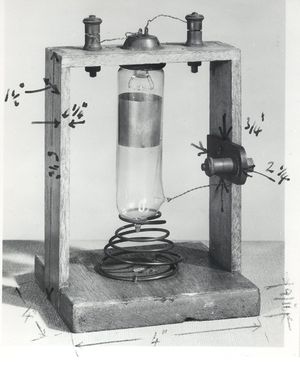 Later kinds of tubes sometimes had more than three elements inside the tube, so they could not be called triodes. A four-element tube, for example, is called a Tetrode. Some electron tubes had other names—a famous tube used in radar is called the magnetron. Other specialist vacuum tubes are known as Travelling Wave Tubes, Klystron, Klystrode, pentode, magic eye and nixie tubes.

The electron tube was the basis of virtually all electronic devices from the early 1900s until the introduction of the transistor in the late 1940s. Today, most of the jobs once performed by the electron tube are done using semiconductor materials. Certain types of materials can act like a one-way valve just like Fleming’s vacuum tube, or the amplifier like De Forest’s triode, but the semiconductors are more compact and rugged. However, for some jobs the electron tube is still in use, like high power RF amplifiers and electronic warfare components.

If you’re using a desktop computer with a glass screen, you’re looking at a special kind of electron tube called a cathode ray tube. Many electric guitar amplifiers use electron tubes, because musicians say they result in better sound. And radio stations and microwave ovens usually use electron tubes to generate high-power radio waves.

In the 1950's and 1960's, television and radio repairs were often done by what is termed " Tube Jockeys". Other slang for vacuum tubes were "Bottles". Another slang phrase around vacuum tubes that was on air was the "Gassy 807", a double meaning to mean an 807 model tube that had lost its vacuum - or a glass of beer.

There are many variants of vacuum tubes, each with their own applications.

Some of these tube metallic structures were housed within one glass envelope, a space saving design.  There was another type of vacuum tube structure used, and that was the Nuvistor. The Nuvistor had UHF applications and exhibited lower noise figures in vacuum tube amplifiers - heavily application dependent, and in audio applications problems with microphony with these types is a huge problem. In RF applications their low inter-electrode capacitances and good noise figures made them moderately common in the better FM tuners and VHF/UHF band radio communications equipment and test equipment. The nuvistor was mostly contrcated as a triode.

There is also a class of vacuum tube known as fast wave devices, and these are characterised by the phase velocity  of the resonant wave having speeds greater than the speed of light. They operate at the high microwave frequency bands up to visible light. Specifically these are the:

One of the few films to graphically illustrate a vacuum tube radio and embellish visual effects is the 2000 Movie titled "Frequency". --> http://www.imdb.com/title/tt0186151/

An interesting reference is the story about Eimac.

Retrieved from "https://ethw.org/w/index.php?title=Electron_(or_Vacuum)_Tubes&oldid=154602"
Categories:
This page was last edited on 12 April 2017, at 13:50.
About ETHW
Policies and disclaimers