A very small advertisement in the November, 1934, issue of QST magazine announced that a new tube, "unsurpassed in every important feature" was available from an obscure company in California. The company was Eitel-McCullough, Inc., and the tube was the 150T. 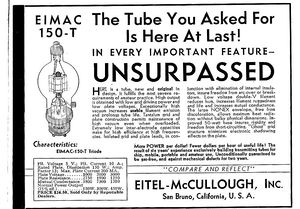 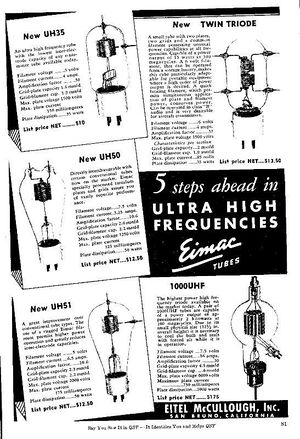 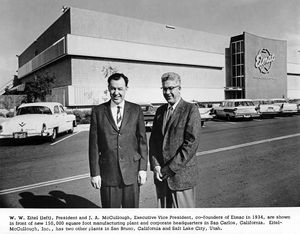 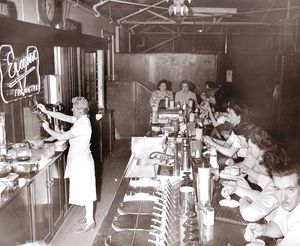 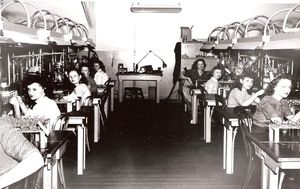 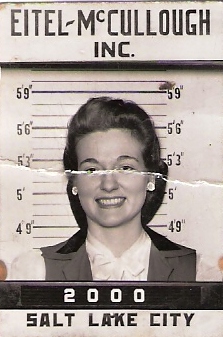 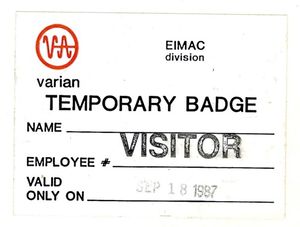 How did it all start?

In 1932 two radio amateurs, Jack McCullough (W6CHE) and Bill Eitel (W6UF), decided to build high power transmitters to work some of the 20 meter overseas stations being heard in California. They found to their dismay that the expensive transmitting tube they purchased refused to work at 1,000 volts and that was all the high voltage their power supply would provide for them.

Both were employed by the San Francisco, California, manufacturing firm of Heintz & Kaufmann, Bill Eitel and Jack McCullough convinced company president Ralph Heintz to allow them to develop a transmitting tube that could operate at lower voltages than those then available to the amateur radio market, such as the RCA 204A or the 852. Their efforts resulted in the design and production of the HK-354 tube.

They decided they could build a better tube themselves that would work at low voltage. They borrowed a modest sum and in 1934 started a company with only three people. They rented a small building that had been a butcher shop located at 798 San Mateo Avenue in San Bruno. The product was the 150T triode. From this humble beginning, the company expanded steadily. Other tubes were added to the line and the number of personnel increased slowly.

In late 1935 some tubes were sold to the U.S. Naval Research Laboratory for use in an experimental radar set that worked on 200 MHz. The 50T was the only tube that provided sufficient pulse power and that was able to stand up to the high plate voltage. More tubes were ordered by the military and in 1939 the first Navy sea radar tests used EIMAC tubes.

During 1938, the U.S. airways were developing radio beacons and high frequency radio links all over the United States. A new EIMAC tube type (450TH) was chosen for this service, and a number of other types were used for broadcast radio, including the newly-developed Armstrong FM broadcast service, and experimental television service. Radio amateurs worldwide also used EIMAC tubes as their popularity grew and dependability became known. Eitel and Armstrong were close and regularly met to discuss problems and fixes. Here is an extract of one such collaboration. Eitel & Armstrong #817.pdf

During the 1940's there were reported incursions by the Japanese along the USA West coast and the paranoia associated with that led to the US government asking Eimac to build a second plant inland. The plan was should their tube facility in San Bruno get destroyed by an enemy action, there would be a second source of tubes.

In 1940 the company received its first big war order from Western Electric for the delivery of 10,000 tubes! Up to now, an order for fifty tubes would be a cause for celebration. Converting the plant from using hand methods to mass production kept everyone working night and day for months, sent the hiring rate skyrocketing and tossed out all standard construction methods and routines. By July, 1941, the original staff was some ten times as large as it was a year earlier and the plant was doubled in size to accommodate the growing work. Expansion of the company was so fast that a second plant was opened in Salt Lake City, Utah. By 1945, EIMAC had grown to employing over 1800 people and nearly 3,500 vacuum tubes per day of all types were being manufactured. 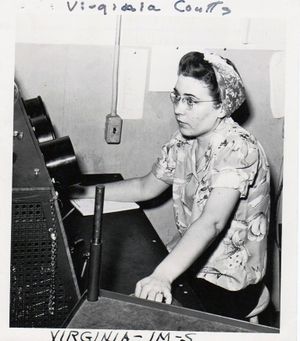 With the end of hostilities in 1945 and the subsequent cancellation of government contracts brought about a crisis at Eitel McCullough, Inc. Tube production levels fell to near-zero as government stocks of surplus tubes were dumped on the market for as little as fifteen cents each. The Salt Lake City plant was sadly closed.

Foreseeing the end of the war, however, EIMAC engineers had evolved new tube types, including production of the new beam tetrode (4X150A) which performed well in the VHF region. At the same time, a new Salt Lake City plant was opened to make television picture tubes (CRT's). The future of the company now no longer depended upon the older tubes that were so plentiful on the surplus market. One feature of the Salt Lake City plant was that it manufactured every component of the tube under the one roof.

In 1958 a new Eitel-McCullough plant was built in San Carlos, California, for production of new tetrode tubes, plus larger tubes for broadcast and TV service. At the same time, TV klystrons and other microwave devices were developed for troposcatter communications. 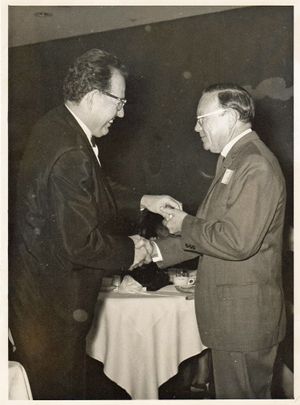 In 1965 Eitel-McCullough merged with Varian Associates of Palo Alto, California. The Varian Eimac divisions continued manufacturing all types of transmitting tubes and are well known worldwide while the Klystron products were transferred from San Carlos to Palo Alto to be made under the Varian logo.

The UHF Klystrode® combines the features of the klystron and the tetrode and was developed at Eimac by Donald Preist, Sr. scientist and Merrald B. Shrader, an ex-RCA tube design engineer, as program manager. The Klystrode® was later renamed the Inductive Output Tube (IOT) for better market recognition.  The original IOT was conceived by A.V. Haeff at RCA in 1938 but it was never made in a high power commercial version; the concept was successfully proven by Eimac and IOTs supplied for high power amplification for UHF television systems as well as scientific accelerators and other applications where high operating efficiency and its small size makes an IOT preferable to a Klystron.

In 1989, as a result of the energy efficient Klystrode® IOT, Varian’s Eimac division was awarded an Engineering Emmy® for technological achievement by the Academy of Television Arts and Sciences. The first Eimac Klystrode IOT’s used in broadcasting were installed at WCES-TV in Augusta, GA in 1988.

In 1984, Bill Eitel and Jack McCullough both retired and maintained a strong interest in the company and, of course, in their amateur radio activities. The EIMAC divisions of Varian owe a great deal to amateur radio for it was in this field that many of the early transmitting tubes proved their worth and -even today- many of the company's customers are radio amateurs.

As Bill and Jack said, "If it were not for amateur radio, EIMAC could never have existed."

Eimac even owned a commercial broadcast station! KSBR was licensed to Eitel McCullough in 1947. The factory engineers built the transmitter which was located at Mt. Diablo and with a TPO of 50 kW and ERP of 300 kW, it had an exceedingly broad coverage area and was used for testing tubes in “real-world” performance.  It was said poor reliability of the antenna was a major problem due to rf heating and corona and ultimately the station ceased operating;  KSBR is now assigned to a college station in Southern California. 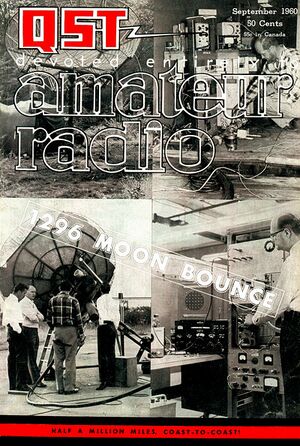 The 301 Industrial Rd. plant in San Carlos was built specifically as a dedicated tube manufacturing facility, not some building that was adapted or re-purposed into that kind of function. It consisted of a 330K square-foot building with multiple city-gas powered generators for back-up power capability.

Ham radio was taken very seriously at Eimac. In the Summer of 1960 from the parking lot in front of the San Carlos Eimac building a dish antenna was set up with a transmitter and receiver operating at 1296MHz and the employees made the first amateur radio Earth-Moon-Earth (EME) transmission.

Eimac’s marketing staff often found other products to add to the tube factory and in several cases Eimac spawned technologies that ultimately led to other companies capitalizing on the work.  In the 60’s as ceramic-metal seals were perfected for tubes, Eimac offered a broad line of ceramic feedthroughs. These were used in vacuum chambers by science laboratories and some special purpose ceramics were built for detonator squibs. When a budding new medical firm needed small hermetic ruby feedthroughs for cardiac Pacemakers, Eimac ultimately delivered in excess of 50K parts for that application.

A ceramic-bodied high intensity lamp named the Illuminator was developed by Eimac. The brightest lamps available, illuminators were employed in military vehicles and helicopters as spot lights and in medical endoscopy. The Illuminator patents# and assets were sold to ILC Technology, subsequently owned by Lumen Technologies and later acquired by Perkin Elmer in 1998.

Then there was the semiconductor company that operated within Eimac’s San Carlos facility. Communications Transistor Corporation, known as CTC, was a Varian-funded startup around 1969, when some Fairchild Semiconductor employees were hired and later operated at the Eimac plant from 1975 until 1981 when Varian sold the business to Acrian.  During that period CTC led in state-of-the-art RF semiconductors and competed with Motorola Semiconductor. In 1991, the CTC; now Acrian assets and technology were acquired by Ericsson and GHZ Technology. Ironically, Varian was directly involved with the semiconductor industry, the very thing that would eventually displace power grid tubes for RF amplifiers. Today many vacuum tube transmitters continue to operate, but since the 1990’s solid state technology has become the norm for new high power RF amplifiers$.

Little has ever been published about the Nuclear Battery that Eimac developed for the Sandia Laboratories National Laboratory. Built at the San Carlos plant around 1961, it was intended for orbiting space applications. Apparently the nuclear lab was setup in a closed room and no hazard signs posted, it was somewhat of a cold war secret project that never eventuated. The nuclear battery / cell used Krypton 85 and it was introduced into a vial and a reaction occurred that generated an electrical current.

Gordon Lavering noted the device had to survive several environmental tests, one of which was thermal storage at low temperatures. Stan Jepson's group brought down a bunch of "Nucs" to be left in the Environmental Test Lab's cold chamber over one weekend, and Dan Danilian was assigned the task to come in Sunday and remove the samples from the cold chamber. When Dan opened the cold chamber he found that one of the Nucs had cracked and, therefore, the internal gas escaped out the Building 1 door and floated somewhere down the Bayshore Freeway! 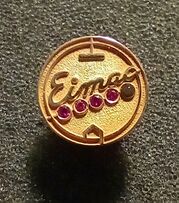 In 1997 the ceramic tube portion of Eimac’s Salt Lake City operation was moved to San Carlos while the glass tube products were discontinued and that production equipment was sold to Triton Services of Easton, PA. Previously Triton was known as the ITT Electron Tube business since 1964 and in 2008 Triton closed its doors. 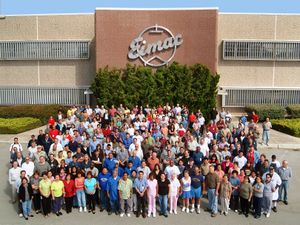 In 2007 the last remaining Eimac plant at San Carlos was closed and consolidated into CPI’s Microwave Power Tube operation in Palo Alto. The 18.1 acre property at 301 Industrial Rd. was sold to the Palo Alto Medical Foundation and in 2014 PAMF completed a modern $230M hospital* at the same 301 Industrial Rd. address Eimac used for 48 years.

In January 2004, affiliates of The Cypress Group, a private equity fund, acquired CPI. 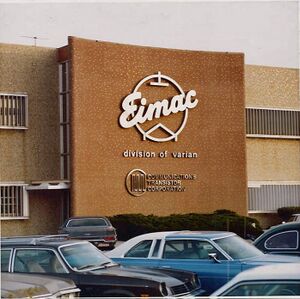 Many of the people working at Eimac were amateur radio operators, and indeed made significant contributions outside their Eimac interests: 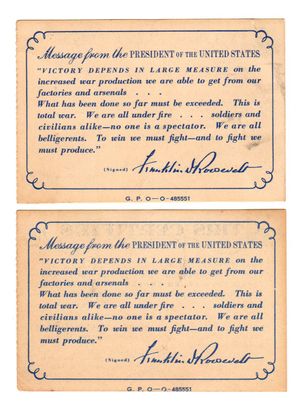 The Tube Collectors Association is the current caretaker of the Perham-Eimac Archive. The Perham-Eimac Archive consists of 48 shelf-feet of Eimac tube manufacturing information from 1942 to 1960 plus several cabinets of legal and miscellaneous information. this archive is available by arrangement to anyone wanting to do tube research. Please contact Ludwell Sibley, Oregon, if interested in using these archives. ** interesting follow up...

Much of the information collected here is a result of gracious and sharing individuals. If you can assist in expanding any information, please ask the IEEE History Committee or e-mail David Burger at  k3hz@ieee.org ) *** If you possess or have access to any photos of the San Carlos plant, please make contact to see if we can obtain permission to get that part of the Eimac story communicated here.. please...

A special thanks for contributions and resources (some too big for me to deal with from Australia) to the following people:

Please refer to the individual photo metadata for contributor acknowledgements and related information.