The radar antenna on top of this plane feeds information to the flight crew, who are monitoring the sky for hostile aircraft. Courtesy: United States Air Force. 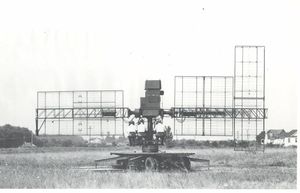 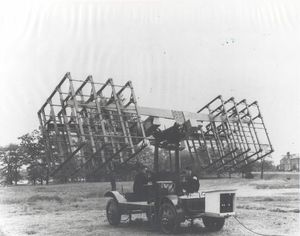 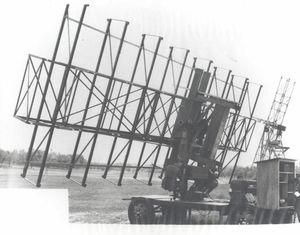 Radar (radio detection and ranging) is an electronic system for transmitting electromagnetic signals and receiving echoes from objects of interest (targets).

The basic concepts of radar were developed in the late 19th and early 20th centuries. However, it was just before and during World War II that radar emerged as a practical engineering device. On 12 February 1935 Robert Watson-Watt sent a memorandum entitled "Detection of aircraft by radio methods", which Hanbury Brown calls "the birth certificate of radar."  During the war, radar played a pivotal role in the success or failure of many military missions. For example, during the 1940 Battle of Britain, a radar system called Chain Home alerted the British of impending German air raids. This warning gave the British time to efficiently mobilize their limited air defense resources. It is widely accepted that the use of radar turned the tide in the battle and helped Britain win a decisive victory.

Most radars work by transmitting a pulse of electromagnetic energy at a target and then listening with a receiver for the reflected echo from the target. Since electromagnetic waves travel at the velocity of light [186,411 miles (300,000 kilometers) per second], the time delay between the transmitted pulse and the received echo can be used to determine the distance to the target (distance = speed × time).

Along with measuring the distance to the target, radars can also measure the direction of the target. The radar’s antenna, in many cases a parabolic (bowl-shaped) metal dish, takes the energy from the transmitter, directs it in a narrow beam towards the target, and then receives echoes reflected back from the target. Other radar antennas have beams that are moved electronically. These “phased array” radars are mostly used for military applications.

Since its use in World War II, radar has been used extensively by the military for a wide variety of missions, such as detection and tracking of aircraft, missiles and satellites, or other space objects. Because of its ability to detect airborne or space borne objects at great ranges (hundreds to thousands of miles), radar is an integral part of most air and missile defense systems.

Air defense radars (both land-based and sea-based) detect and track targets, and guide the interceptor to the target missile or aircraft. Airborne radars detect and track hostile aircraft. They provide nations with early warning of hostile attack from ballistic missiles.

In addition to their historical and current use in military operations, radars have many civilian uses as well. They are used extensively for air traffic control, providing the controllers with an up-to-the-second location of all aircraft within about 60 miles (about 100 kilometers) of an airport. A variety of different radars are used to detect and study hazardous weather conditions such as tornadoes, hurricanes, and severe storms. This information is given to air traffic controllers, and assists them in providing airline pilots with flight paths that are relatively free from hazardous weather conditions. Doppler radars are used by law enforcement to monitor and control automobile speed and traffic. All large commercial maritime ships use radar as a navigation aid, allowing them to detect and track other nearby ships, landmarks, islands, navigation buoys, and hazards such as icebergs. Radars have also been used for scientific research. A major test of Albert Einstein’s general theory of relativity was performed using radar, and the terrain of Venus was first mapped using a high power.

An important application for radar is tracking space debris, necessary to avoid collisions with "space junk" left in orbit after rocket launches which often discharge pieces of metal from the detached bodies, as well as orbiting hardware intentionally destroyed militarily.   Both space launches and re-entries must be timed to avoid any known debris in their trajectory.

Orbiting satellites are also susceptible to damage if struck by even a small piece of debris;  radar data is stored and analyzed using massive computer systems to calculate probability of an intercept.

The FPS-85 radar located at the southern tip of Florida, is one of the foremost systems used for this purpose. Part of the Space Surveillance Network (SSN), it was the first large phased array radar built and has been re-purposed and upgraded since its inception in the early 1960's when it was intended to monitor potential Russian missiles that might be launched from Cuba.

The FPS-85 is a fixed position, electronically steerable array utilizing 72 dipoles to combine rf power at 442MHz in space. It's panel is massive in size (details see:  https://www.globalsecurity.org/space/systems/an-fps-85.htm  and  https://mostlymissiledefense.com/2012/04/12/the-fps-85-radar-april-12-2012/ 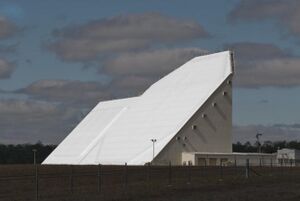 NASA operates an Orbital Debris Program to "characterize objects too small to be tracked by the U.S. Combined Space Operations SSN but large enough to threaten human spaceflight and robotic missions"

At the other end of the physical size scale are modern, mass-produced FMCW (Frequency Modulation Continuous Wave) radars. These low-cost chirp-sequenced radars have become standard in nearly every automotive brand made today.

Radars of this type are now employed in collision avoidance as well as position guidance for trucks, trains, railroads, toll booths etc.  Frequencies of 24GHz and 77GHz are commonly used.