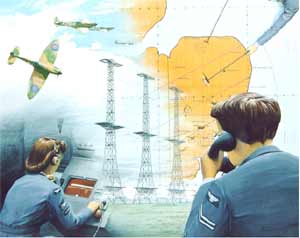 An artistic rendering of the people and equipment that contributed to Chain Home's success. Copyright unknown.

World War II began in September 1939, when Germany invaded—and quickly defeated—Poland. By the summer of 1940, less than a year later, nearly all of Western Europe was under Nazi control. The British had been driven from the shores of Dunkirk and watched France crumble from across the English Channel. Now, Hitler turned his attention to Great Britain and began planning an invasion. To do so Hitler needed to gain control of the English Channel. The German Navy couldn’t do it, so Hitler hoped to destroy the British Navy, and any coastal resistance, with air superiority. Hitler had great faith in his undefeated Luftwaffe, and with good reason. Comprised of more than 2400 fighters and bombers, it would face Britain’s 900 fighters.

With these dismal odds, the British needed an early warning system, one that would disclose the German air position and take away their element of surprise. This system would also allow British pilots to conserve precious time in-flight and remove the necessity of mounting constant air patrols over the entire English East Coast. It was through the extraordinary foresight of radio researcher Sir Robert Watson-Watt that the British had in place in 1940 an entire network of long-range early-warning radar stations whose reports were tightly integrated by Fighter Command. This was the Chain Home radar system, the first radar-based air defense system, which was ready just in time for the Battle of Britain.

Like all pulsed radars, Chain Home sent a burst of radio energy at a target, then measured the time it took for the energy to reflect back to its receiver. The radar calculated the range to the target by multiplying the time between sending the pulse and its return by the speed of light and then dividing by two. What made Chain Home unusual was how it measured the bearing of (or direction to) the target. More conventional radars measure direction by sending and receiving the radio energy in narrow beams, like a flashlight, and scanning those beams around in space until a target is illuminated. The direction to the target is determined by the pointing angle of the antenna when the received target reflection is strongest. 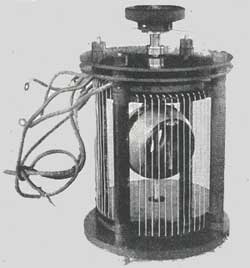 A radio goniometer similar to those used in Chain Home.

In the late 1930s the technology to generate high-power pulsed radio energy at wavelengths short enough to make narrow beams did not exist. Instead, Chain Home relied on antennas that illuminated a huge area, like a floodlight. These antennas did not move or scan at all. Rather, Chain Home radar operators chose a target (“blip”) on their screen and turned the knob of a special coil-like instrument to null out or minimize the blip. Then they could read the direction to this target from a scale around the knob. This device (called a radio goniometer) electronically steered the nulls from a pair of simple fixed receiving antennas. This idea was invented during the first decade of radio technology development and was used by Watson-Watt to track radio static generated by thunderstorms years before the war.

Although it required intense human interaction both to direction-find on each target and to filter the reports from many radar stations into a coherent air picture, the Chain Home system was highly effective, especially during those critical months in the summer and fall of 1940. Still, the Battle of Britain was a costly conflict. By the end of the battle, the Luftwaffe had lost some 1700 aircraft and nearly all their crew. Thanks to the early warning and raid locations provided to Fighter Command by the Chain Home radar, and the rapid production of replacement fighters, the British lost just over 900 aircraft and saved about half their pilots—and most importantly, forced the Germans to abandon their plans to invade England.

Retrieved from "https://ethw.org/w/index.php?title=Chain_Home&oldid=119956"
Categories:
This page was last edited on 14 September 2015, at 17:09.
About ETHW
Policies and disclaimers