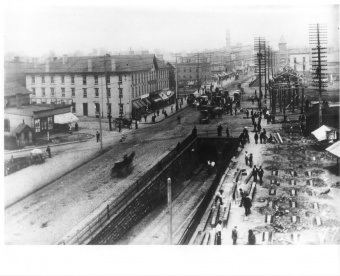 Traversing the Earth through land, sea and air has been one of the driving factors behind technological innovation. From the ancient invention of the wheel to modern devices like trains, planes and automobiles, transportation remains a constant concern for society.

By water, human ancestors were already boating great distances thousands of years ago. Originally at the mercy of currents, human-powered oars were soon adopted, and ultimately the wind was harnessed.

On land, humans always sought ways to travel and transport more efficiently, from the wheel barrows to bicycles to skateboards. Animals—as in “Horsepower”—provided the energy for one of the oldest forms of engineered transportation methods, used by humans for thousands of years before its decline in the 19th century. James Watt's 1781 steam engine revolutionized travel and gave power to early locomotives and transformed the ship to free it not just from tides from winds as well. Eventually, steam gave way to electricity, and Frank Sprague made huge advancements in electrification of railroads. The Richmond Union Passenger Railway line served as a prototype for the first commercial street car. Olds and others pioneered the use of the internal combustion engine for transportation, and Henry Ford would later mass produce automobiles, making them an affordable reality for people around the world. The Wright brothers and other pioneers began heavier than air human flight at the beginning of the 20th century, and Jet engines were developed during World War II, along with the V1 and V2 Rockets that would set the stage for the developments in both air and space travel over the next decades. At the same time, water travel was no longer limited to the surface, but a whole new world was opened up by underwater oceanic engineering developments.

Retrieved from "https://ethw.org/w/index.php?title=Category:Transportation&oldid=193852"
This page was last edited on 17 August 2022, at 11:13.
About ETHW
Policies and disclaimers