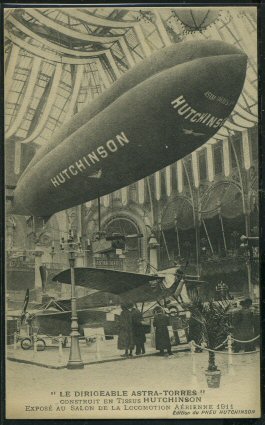 In 1901, the Spanish engineer, Leonardo Torres-Quevedo began the development of a system, which he called Telekine, which was able to do "mechanical movements at a distance." The system was a way of testing dirigible balloons of his own creation without risking human lives. In 1902 and 1903 he requested some patents for the system. With the Telekine, Torres-Quevedo laid down modern wireless remote-control operation principles.

The plaque can be visited in the Torres Quevedo Museum, at the Civil Engineering School of the Universidad Politécnica de Madrid, City University of Madrid, Spain, at these coordinates: 40.4468302, - 3.7315760

Torres Quevedo also made some important contributions to aeronautics, a field in which he carried out important research on dirigible balloons. In contrast with the rigid internal frame airships, such as the one invented by the German Count Von Zeppelin, and nonrigid ones, such as Brazilian aviation pioneer Santos-Dumont’s, Torres Quevedo proposed a semirigid system, based on an internal frame of flexible cables which bestowed rigidity on the balloon through internal gas pressure. The inventor thus combined the advantages of both models, solving the transport problem suffered by the former and the basket suspension and stability issues affecting the latter. Torres Quevedo presented his first dirigible balloon project to the French and Spanish Academies of Sciences in 1902, receiving favorable responses from both academies.

In 1905, he began the construction of a small dirigible model with help from Captain-Engineer of the Spanish Air Force Alfredo Kindelán. The first tests were carried out in Guadalajara Military Aerostatics Park, Spain, in 1908.

From that year, Torres Quevedo embarked on a fruitful commercial relationship with the French Company Astra, which finally led him to assign exclusive worldwide exploitation rights on his balloon patents in 1910. He did, however, reserve all rights for Spain.

Interestingly, the Astra–Torres dirigibles, as they came to be known, were successfully used by the French and British armies in World War I to counteract the German Zeppelins’ dominance.

Torres Quevedo started to develop the idea of a remote control around 1901 or 1902, as a way of testing his airships without risking human lives. He was the first person to lay down the modern remote control operation principles, which he expressed in a prototype that he patented in 1903 under the name Telekine. This term came from two Greek words: tele (far away, in the distance) and kine (force, movement), resulting together in “movement at a distance,” which is basically what the inventor was trying to achieve.

He carried out his first Telekine experiments a year later with a simple tricycle. He managed to make it go forward and backward, as well as change direction, by sending orders from a wireless telegraph transmitter from a distance of up to about 32 yd.

After this, Torres Quevedo decided to extend the use of his remote control to engine-driven boats. The tests he performed in 1905 and 1906, in Madrid’s Royal Country House (Real Casa de Campo) pond, with a small boat and short distances, as well as in Bilbao estuary, where he successfully took full control of a dinghy with a crew of eight at distances of over 1.25 mi, are well known.

The positive results of those experiences encouraged Torres Quevedo to apply to the Spanish government for the financial aid required to use his Telekine to steer submarine torpedoes, a technological field which was just starting out. His application was, sadly, denied, which caused him to abandon the development and improvement of the Telekine.