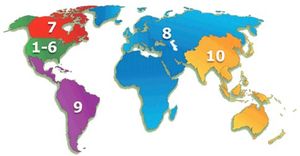 On 24 April 1962, IRE approved the formation of Region 8 and on 24 May 1962, shortly before the merger, the IRE created Region 8. Initially, the new Region comprised six Sections in Europe, the Middle East, and North-Africa: Benelux, Egypt, France, Geneva, Israel, Italy, but soon after its formation, the UK & RI was added. Dr. Rinia (Benelux) was the first Director of Region 8, 1962-1964.

The IRE type of structure was adopted, but revised: the number of Regions in the USA was reduced from seven to six; Canada became Region 7; Europe, the Middle East, and North Africa became Region 8 on 8 January 1963, which is therefore the date on which Region 8 was founded; other parts of the world were covered by Region 9. The present Regional structure resulted from later changes: on 1 January 1967 South America became Region 9, with Region 10 covering other parts of the world, still including a great part of Africa; finally on 1 January 1981 the remainder of Africa became part of Region 8. 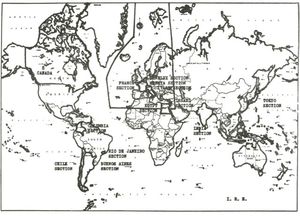 As mentioned in the September 1995 interview by Bob Winton (archived at the IEEE History Center, with a link from the Region 8 website), initial attempts to form a Lithuanian Section involved Prof. Raimundas Jasinevicius, from Kaunas University of Technology, who had established links with Universities in London, England many years before, for the exchange of junior academics, etc. Progress with Section formation was very slow and made slower by his absence in Denmark for six years as Lithuanian Ambassador. However, the Section was finally established in 2005, based mainly in Vilnius. This was followed by the Estonia Section formation in 2006.

A short history of IRE Region 9 / IEEE Region 8, by Martin J. Bastiaans - A history of IEEE Region 8 spanning its origins from the IRE Region in Europe, through the IRE/AIEE merger forming the IEEE and subsequently to the present day Region 8 consisting of Europe, the Middle East, and Africa. Included are personal reflections of past directors, committee meetings and conferences, student activities, award recipients from Region 8, and Region 8 history papers presented at HISTELCON 2012. A number of archival documents are attached as appendices, including ephemera and minutes from early Region 8 Committee meetings.

Early history of Region 8 and the UK & RI Section, by Bob Winton, Mick Byford, and Robert Williams - An interview conducted by William Aspray on 4 September 1995 for the IEEE History Center.