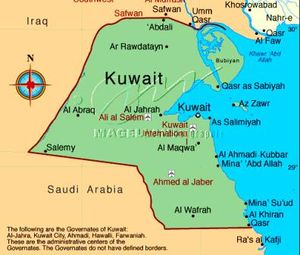 The IEEE Kuwait Section is located in Region 8. The Section was formed on 20th of Feb. 1990

The first Board Members in the IEEE Kuwait Section are as follows:

Board Meeting started from the beginning of year 1989 until the official formation of the Section on the 20th of February 1990.

The IEEE Kuwait Section shall celebrate the 25th Anniversary on 20th of February 2015 in Kuwait City with a social event.

Kuwait section in association with the other Arabian Gulf sections, namely, Saudi Arabia East, United Arab Emirates, Bahrain, and Qatar held the IEEE-GCC 5th conference in Kuwait during the period 16-19 of March, 2009. The attendance was more than 750 participants from around 27 countries.

IEEE Women in Engineering, is centred around Kuwait University

Retrieved from "https://ethw.org/w/index.php?title=IEEE_Kuwait_Section_History&oldid=186790"
Categories:
This page was last edited on 2 December 2021, at 19:07.
About ETHW
Policies and disclaimers