The Croatia Section was approved under its present name on 1 August 1992. 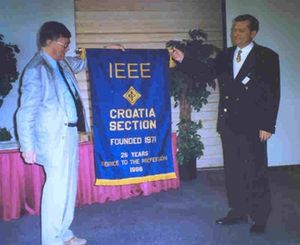 History of the Croatia Section

The Croatia Section derives its roots from the Yugoslav Section (1971-1992). In 1992, following the wars in Yugoslavia, in which the Socialist Federal Republic of Yugoslavia was dissolved as a state, a decision was made by the Executive Committee of the Yugoslav Section to form three new IEEE sections in newly established countries. The historic meeting at which this decision was organized by the Region 8 Director Kurt Richter, on April 30, 1992, in Graz, Austria. Those present included Baldomir Zajc from Ljubljana, Slovenia, as Yugoslav Section Chair; and two Executive Committee members, Aleksandar Szabo from Zagreb, Croatia; and George Paunovic from Belgrade, Serbia. They decided to petition for approval to form three new sections: Croatia Section and Slovenia Section, within the territorial limits of their respective countries, and the (new) Yugoslavia section, within the territorial limits of the (new) Federal Republic of Yugoslavia (later to be renamed to Serbia and Montenegro Section, in 2005).

Here is the petition letter, with list of petitioners, dated 1992, asking to create a Croatia Section of IEEE. (We are still missing the Congratulatory letter from IEEE acknowledging the creation of Croatia Section.)

Henceforth, the Croatia, Slovenia and Serbia and Montenegro sections regard August 1, 1992, as their "second birthday", being the date of formation under their new/present names. In 1996, all three Sections celebrated their 25th anniversary.

Retrieved from "https://ethw.org/w/index.php?title=IEEE_Croatia_Section_History&oldid=178199"
Categories:
This page was last edited on 28 January 2020, at 17:20.
About ETHW
Policies and disclaimers