Formation of IEEE by the Merger of AIEE and IRE 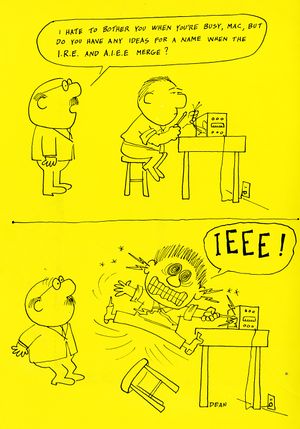 The AIEE and the IRE Converge[edit | edit source]

In the 1940s, electronics rose to a new prominence as governments throughout the world organized their scientists and engineers to devise technologies for use in World War II. One set of efforts produced pioneering electronic digital computers such as Colossus in England and ENIAC in the United States that used thousands of vacuum tubes. An even larger effort, centered on the euphemistically named Radiation Lab established at MIT, developed radar as an important war tool. To the chagrin of IRE and AIEE, physics played a far more prominent role in these advances than engineers. With the invention of the transistor, the first solid state electronic amplifier and switch in 1947, the possibilities for electronics seemed endless.

The IRE in particular grew rapidly alongside these changes, expanding from 6,000 members in 1940 to 17,000 members in 1945 and 21,000 members in 1950. AIEE membership grew more slowly from its larger base. In 1948, IRE adopted a decentralized “professional group” structure that allowed it to incorporate the new fields, such as electronic computers and information theory, hold specialized conferences, and publish specialized journals. The AIEE’s centralized technical committee system proved less nimble. In 1956, the IRE passed the older society in the number of student members as students increasingly turned to electronics. In the following year, IRE became the larger society in total number of members as well with both societies over 50,000. While the IRE had always accepted members from other countries, most of whom joined to receive its highly regarded journals, that number grew as well, and IRE members formed sections in countries including Japan, Italy, Israel, and Colombia.

Through the 1950s, the two societies grew closer, holding joint meetings, developing a joint membership policy, merging student chapters, cooperating on standards, and exploring the possibility of combining to form a single United States-based organization for all electrical and electronic engineers.

The AIEE and the IRE Merge[edit | edit source]

In 1962, a joint committee of the societies agreed on a set of “Principles of Consolidation,” which first the boards and then the membership of both societies approved. On 1 January 1963, the Institute of Electrical and Electronic Engineers was born with 150,000 members, 140,000 of whom were in the United States. Now a single society spanned the technologies, the industries, and the academic allegiances of what had become a complex, multifaceted discipline.

Legally, the AIEE was the surviving institution, albeit with a new name. But as a practical matter, the policies and practices of the larger IRE for the most part prevailed. The IEEE adopted the decentralized professional group structure of the IRE over the less nimble centralized technical committee structure of the AIEE.. Gradually, these groups incorporated the corresponding AIEE technical committees, and, beginning in 1970, as they did so were renamed as IEEE Societies. The largest IRE professional group became the IEEE Computer Society in 1970. The biggest part of AIEE became the IEEE Power Engineering Society. The IRE Transactions published by the various Professional Groups simply substituted IEEE in their titles. The Proceedings of the IEEE continued the numbering and editorial policies of the IRE Proceedings. Only the AIEE had had a general interest membership magazine, Electrical Engineering. This was replaced by a new magazine, IEEE Spectrum. The IRE Student Quarterly and the AIEE Student Digest yielded to the IEEE Student Journal, though this was merged into IEEE Spectrum in 1970.

Back to IEEE History page

For more details of how the the two organizations were merged, see the Oral History by 1975 IEEE President Arthur Stern.

Retrieved from "https://ethw.org/w/index.php?title=Formation_of_IEEE_by_the_Merger_of_AIEE_and_IRE&oldid=173879"
Categories:
This page was last edited on 17 February 2019, at 02:40.
About ETHW
Policies and disclaimers