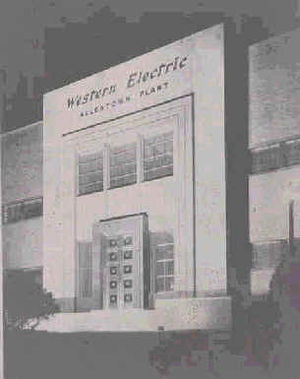 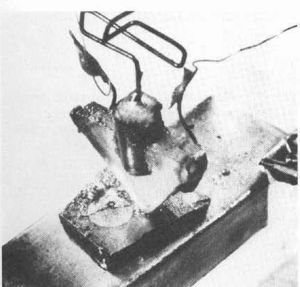 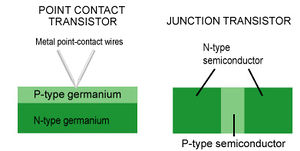 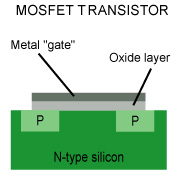 Today, when we refer to electronics, we are usually referring to things containing transistors. Transistors are devices that switch electric currents on and off or amplify electric currents. They use specially prepared substances to do this, and are used individually or in clusters of up to several million on integrated circuits. The transistor got its start in the 1940s when engineers began looking for a replacement for the electron tube, an earlier device for amplification and switching. The electron tube was based on the light bulb, so it was big, fragile, and created a lot of excess heat.

The inventors of the point-contact germanium transistor were John Bardeen, and Walter Brattain, who worked under William Shockley, at Bell Telephone Laboratories  in New Jersey. In 1939, Brattain and Shockley began to work together on an electron tube replacement made of the chemical element germanium, a semiconductor. Germanium and other semiconductors had been used for many years in point-contact diodes, which consist of a small sample of semiconductor crystal with a permanent electrical connection at one end and an adjustable connection at the other. When the “cat’s whisker” is adjusted correctly, the diode acts as a one-way valve for electric current. Brattain and Shockley believed that they could modify the diode so that they could regulate the current the same way the grid in an electron tube regulates current. The device did not work. Walter Brattain and John Bardeen returned to the idea in the middle 1940s. They found a new way to connect the germanium crystal to a circuit that allowed it to amplify current.

After a little brainstorming and an office poll, the new device was named the “transistor,” which was short for “transfer resistor.” The point-contact transistor, as it was called, worked, but not very well. It was difficult to make and the early models often failed unexpectedly. Shockley suggested a new design almost immediately, which became known as the junction transistor. A junction transistor consists of a single piece of semiconductor crystal, into which chemical impurities have been introduced to create three chemically different regions. The transistions between the regions are known as junctions. The impurities and junctions change the way that the crystal conducts electricity. By creating a sandwich of three different layers, the middle layer can be electrically stimulated so that it can affect the flow of electricity from the top to the bottom layers.

It acts like a tiny hand on an electrical spigot. The first germanium junction transistors were introduced around 1950, and engineers quickly developed many different ways of making them so that they were cheaper, more useful, and easier to make in large quantities.

The military began using junction transistors almost immediately in airplanes and missiles, where engineers were trying to squeeze in complicated communication and guidance systems. Transistors were perfect for these military systems, because they were much smaller and used much less electrical current than vacuum tubes. Soon, they were used in hearing aids, portable radios, and all sorts of other electronic devices.

Bardeen, Brattain, and Shockley were awarded the Nobel Prize in physics in 1956 for their groundbreaking work. Shockley went on to become an entrepreneur in the transistor manufacturing business, while Bardeen became a professor and worked on superconductors. Bardeen later won a second Nobel Prize for that work.

Meanwhile, transistor development continued at a rapid pace. In 1954, Texas Instruments introduced the silicon transistor, made of a material that was even more rugged and reliable than germanium. By 1960, it was possible to make many transistors on a single, thin slab of silicon, cut them up into individual units, and then make them ready for use. This technique was modified so that the transistors were already connected into circuits before the silicon wafer was cut, leading to the “integrated” circuit.

As computers and other systems began relying on integrated circuits more heavily, engineers looked for ways to design simpler, high performance transistors. The MOSFET transistor, which stands for metal-oxide-semiconductor field effect transistor, was one of the key breakthroughs that made possible today’s high-speed computer chips with billions of microscopic transistors. The transistor age may be coming to an end, however. In the near future, engineers expect that transistors built atom-by-atom, or circuits using [[DNA - From Nature to Technology|DNA or some other complex molecule may replace the MOSFET.

Triumph of the MOS Transistor

Retrieved from "https://ethw.org/w/index.php?title=Transistors&oldid=154731"
Categories:
This page was last edited on 12 April 2017, at 13:52.
About ETHW
Policies and disclaimers