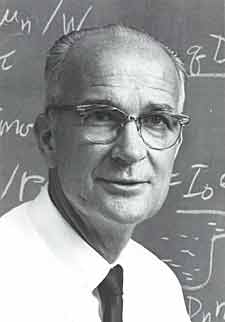 William Shockley gained fame and shared a Nobel Prize for his development of point-contact transistors, work that provided the basis for one of the sweeping technological revolutions of the twentieth century. His junction and field-effect transistors became workhorses of the electronics industry. In later years, he would gain notoriety for his views on eugenics. In sum, he was a brilliant, pivotal and controversial figure, stimulating to work with but often difficult to work for. But even his failures could catalyse important change: the men who fled his autocratic management of Shockley Semiconductor Laboratory founded the key companies in the integrated circuit revolution, qualifying Shockley at the very least as the grandfather of Silicon Valley.

Shockley was born in London to American parents, William and May. His father was a mining engineer and his mother was one of the first women surveyors in the United States. During his early childhood, his family moved a great deal, and his parents educated him at home until he was eight years old. After the Shockleys settled in California, William began to attend school. He received his B.S. degree from the California Institute of Technology in 1932. Soon thereafter, pursuing a fascination in the new European theories of quantum mechanics, he traveled east to attend graduate school at the Massachusetts Institute of Technology. There, he was noticed by physicist Phil Morse, who would lead Shockley to Bell Telephone Laboratories and later to wartime advisory groups. Shockley received his Ph. D. degree in 1936 and that same year joined the technical staff at Bell Labs.

One of his early accomplishments at Bell Labs was to design, with colleague James Fisk, the world’s first nuclear reactor. Intrigued by advances toward fission by European scientists, Bell gave the two researches a small room and lab equipment. It was in his own shower, however, that Shockley had the thought, “If you put the uranium in chunks, separated lumps or something, the neutrons might be able to slow down...and not get captured and then be able to hit the U-235.” The resulting reactor design was forwarded to Washington, which promptly classified it and denied Fisk, Shockley and the labs any patent. Only after the war, and after having duplicated his concept, did the Manhattan Project physicists learn of Shockley’s work.

The same year of his graduation, he joined Bell Telephone Laboratories, working in the group headed by Dr. D.J. Davisson and remaining there until 1955. It is here that he began the development of the transistor, a fundamental technology that brought the world into a new era of modern day electronics. However, during WWII he had to interrupt his time at Bell Telephone Laboratories to serve as the Research Director of the Anti-submarine Warfare Operations Research groups; afterwards he served as Expert Consultant in the office of the Secretary for War.[4] Working as a military researcher, he was able to calculate the statistical improvement of air power, and advised the US Air Forces on how to increase the efficiency and accuracy of its bombing campaign. He also influenced the U.S Navy's ability to better target German u-Boats, which were a danger to Atlantic trade between the U.S and Britain. [5]

During World War II, on leave of absence from Bell, he developed operations research techniques for the Navy's Anti-Submarine Warfare Operations Research Group (ASWORG) and worked as an expert consultant for the Office of the Secretary of War. His work on the effectiveness of B-29 bombing campaigns enabled the nighttime bombings of Tokyo and other Japanese cities in 1945. In July 1945, he issued a report recommending a new method for estimating the possible casualties from a land invasion of Japan; he conjectured that such an invasion could result in 1.7 to 4 million American casualties and 400,000 to 800,000 deaths. There is no evidence that his estimates were circulated at upper levels in the Truman administration or influenced the decision to drop the atomic bomb on Hiroshima.

Birth of the Transistor 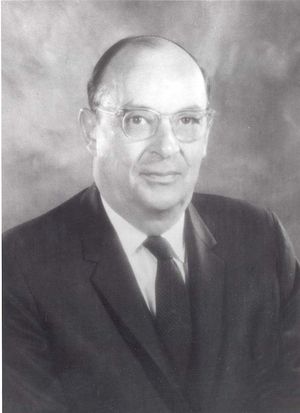 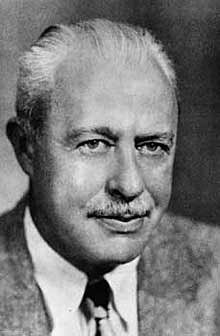 After the war, Shockley returned to Bell Labs, where the mandate was to find solid-state alternatives to cumbersome vacuum-tube amplifiers. Shockley proposed using an external electrical field on a semiconductor to affect its conductivity. He worked on a team that included John Bardeen, a theoretician whose insights enabled them to overcome early failures, and Walter Brattain, a brilliant and gifted experimentalist. By 1947, they had created the first solid-state amplifier from germanium, gold foil, a paper clip and the viscous chemical, glycol borate (or “gu”). They named their “point-contact” device a “transistor” for its dual properties of trans-conductance and trans-resistance.

Bardeen, Brattain and Shockley had a falling-out over the credit for the invention. Shockley’s contribution, the field-effect concept, had been anticipated (but not put to practical use) by Julius Lilienfeld in a 1925 Canadian patent; Shockley’s name was left off the patent applications by Bell Labs. He maneuvered unsuccessfully to have his name alone on the patent. Meanwhile, he pursued a separate line of research: the resulting “junction transistor” was announced in 1951, a year after the publication of his classic Electrons and Holes in Semiconductors. He would eventually garner 90 patents under his name. When he, Bardeen and Brattain jointly received the Nobel Prize in 1956, they reconciled.

While his partners moved on to other topics, he foresaw the commercial potential of transistors as the “nerve cells” of computers. In 1954, Shockley was named director of transistor physics research at Bell, but left Bell Laboratories in 1956 to join Beckman Instruments, Inc. and establish the Shockley Semiconductor Laboratory in Mountain View, California, for research, development, and production of new transistor and other semiconductor devices. This became the Shockley Transistor Corporation, a subsidiary of Beckman Instruments, in 1958. The firm was the first to work with silicon as a semiconductor. His decision to end research into silicon, combined with his sometimes paranoid leadership style, prompted the exit of the “Traitorous Eight,” who included Robert Noyce (one of the founders of Intel) and other Silicon Valley pioneers. Their development of circuit boards would render much of Shockley’s own continuing research obsolete.

In April 1960, Shockley Transistor Corporation was acquired by the Clevite Corporation, and Shockley continued as a consultant to the Shockley Laboratories of Clevite Transistor until its sale to International Telephone and Telegraph in 1965. In 1965, Shockley renewed his association with Bell Telephone Laboratories in the capacity of executive consultant. He retired from this position in February 1975.

In 1961, he and his wife suffered serious injuries in a car crash.

After winning the Noble Prize in physics and developing his own start up company, Shockley was considered a leading international figure within the scientific community. However, things took a controversial turn in his career; in 1965, Shockley attended a Nobel conference and gave his infamous speech: "Genetics and the Future of Man." In the lecture he warned of "genetic deterioration" and "evolution in reverse". In 1965, he embarked on a new career as a eugenics researchers and advocate. His fascination with psychological measurement, indicated by his use of behavioral testing at Shockley Semiconductor, led him to worry that modern civilization allowed those with lower “social capacity” (a more encompassing trait than IQ) to overbreed. Provocatively, he suggested that this dysgenic effect was more pronounced among African Americans, even if the initial genetic starting point had been the same (a point that he did not necessarily concede). His outspokenness gained him a reputation as a crank and a racist, though he continued to characterize himself as a true liberal in his pursuit of factual truth. He gained further notoreity when he made a donation to the Repository for Germinal Choice, which the media soon dubbed the “Nobel Prize sperm bank.”

His efforts got the attention of Harry Weyher, the president of the Pioneer Fund. Between 1969 and 1976, the Pioneer fund provided Shockley with nearly $1.5 million in grants through Stanford University towards eugenics research.

His eugenic beliefs aside, he continued to accrue scientific honors. A lecturer at Stanford from 1958 to 1963, he had been named the first Alexander M. Poniatoff Professor of Engineering and Applied Science. On 1 September 1975, he became Alexander Poniatoff Professor of Engineering and Applied Science, Emeritus. He also remained a trusted advisor to the government on military and techological matters. During 1954 and 1955, he had served as deputy director of the Weapons Systems Evaluation Group for the United States Department of Defense. He was a member of the Scientific Advisory Panel of the U.S. Army from 1951 to 1963, and of the Air Force Scientific Advisory Board from 1958 to 1962. He was a member of the President's Science Advisory Committee Panel on Scientific and Technical Manpower beginning in 1962. He served as senior consultant to the Army Scientific Advisory Panel and was a member of the Scientific and Technology Advisory Committee to the National Aeronautics and Space Administration.

In addition to the Nobel Prize, Shockley's awards for scientific achievement and public service include: the Medal for Merit from the Office of the Secretary of War (1946); Air Force Association Citation of Honor (1951); the IEEE Morris N. Liebmann Prize (1952); U.S. Army Certificate of Appreciation (1953); American Physical Society Buckley Prize (1953); National Academy of Sciences Comstock Award (1954); American Society of Mechanical Engineers Holley Medal (1963); Oesterreichiescher Gewerbeverein of Austria Wilhelm-Exner Medal (1963); California Institute of Technology Alumni Distinguished Service Award (1966); National Aeronautics and Space Administration Certificate of Appreciation [Apollo 8] (1969); NASA Public Service Group Achievement Award (1969); the IEEE Gold Medal on the Twenty-fifth Anniversary of the Transistor (1973). In February 1974 Shockley, was inducted into the National Inventors Hall of Fame, which is administered by the National Council of Patent Law Association. He was awarded the IEEE Medal of Honor in 1980, "For the invention of the junction transistor, the analog and the junction field-effect transistor, and the theory underlying their operation."

Shockley received honorary doctorates from the University of Pennsylvania (1955); Rutgers University (1956); and Gustavus Adolphus College (1963). He is a Fellow of the IEEE and the American Academy of Arts and Sciences and is a member of the National Academy of Sciences, the American Institute of Physics, and the honorary societies Sigma Xi and Tau Beta Pi. Over one hundred of Shockley's articles have appeared in scientific and technical journals. He was the author of Electrons and Holes in Semiconductors (1950); editor of Imperfections of Nearly Perfect Crystals (1952); and co-author of a book, Mechanics (1960).

Retrieved from "https://ethw.org/w/index.php?title=William_Shockley&oldid=158569"
Categories:
This page was last edited on 12 February 2018, at 19:36.
About ETHW
Policies and disclaimers