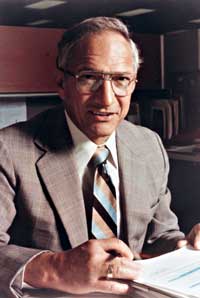 Robert Noyce, one of the inventors of the integrated circuit and cofounder, along with Andy Grove and Gordon Moore, of Intel Corp. Courtesy: Intel 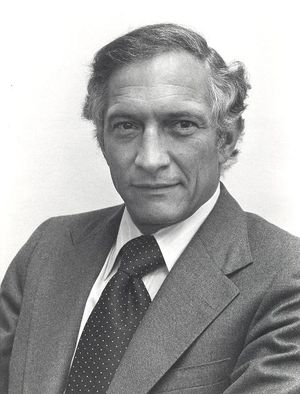 Robert Noyce helped create the first integrated circuit, the forerunner of the microprocessor. Noyce also co-founded two companies that helped usher in the era of Silicon Valley—Fairchild Semiconductor and Intel.

As a child growing up in Iowa, Noyce showed an early interest in tinkering and figuring out how things work. This interest deepened when Noyce enrolled at Grinnell College in 1946. Noyce took his degree in physics, but he also demonstrated great talent for engineering. At Grinnell he was introduced to the transistor, which had been invented by a team headed by William Shockley at Bell Labs in 1947. Noyce was fascinated with the new device.

At the time, making silicon transistors was an arduous process. They had to be wired together by hand. Noyce and Fairchild co-founder, Gordon Moore, began looking for a better way of connecting transistors. They came up with the idea of combining transistors in a solid block of silicon. This was the integrated circuit. As fate would have it, another inventor named Jack Kilby was working on the same problem in Texas. Noyce and Kilby came up with the same solution at virtually the same time. For that reason they share credit for the invention.

In 1968, Moore and Noyce left Fairchild Semiconductor with the dream of creating a company that specialized in developing integrated circuits for the computer industry. They called their venture Integrated Electronics, which is now more commonly known as Intel. At Intel, engineers developed a microchip that could store computer language (ones and zeroes) and introduced its first random access computer (RAM) memory chip in 1970. After that advancement, the first microprocessor quickly followed. Noyce also made his mark as an innovative manager with an easygoing style that encouraged creative solutions to problems.

Noyce was richly rewarded for his accomplishments. In addition to acquiring great wealth, he held sixteen patents, and received many awards, including the National Medal of Science, the National Medal of Technology, the IEEE Medal of Honor (1978), and the Charles Draper Prize of the National Academy of Engineering. Noyce was highly regarded by his peers who respected his technical brilliance and admired his gracious personality.

Noyce died unexpectedly of a heart attack in June 1990 at the age of 62.

Retrieved from "https://ethw.org/w/index.php?title=Robert_Noyce&oldid=156093"
Categories:
This page was last edited on 14 August 2017, at 14:59.
About ETHW
Policies and disclaimers