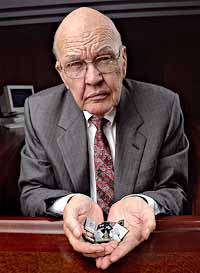 Jack Kilby was born in 1923 in Missouri to Hubert and Vina Freitag Kilby. His father was an executive with the Kansas Power Company. Kilby traveled with his father during vacations and learned that cost was an important variable in engineering solutions, a lesson he kept with him all his life. Aware that he wanted to be an engineer by the time he was in high school, he studied engineering at the University of Illinois. His college studies were interrupted by military service during World War II, when he worked in an army radio repair shop in India. After returning to the United States, he graduated from college and married Barbara Annegers in 1948.

While working at Centralab in Milwaukee designing circuits, Kilby also earned a master’s degree in electrical engineering. Like other electrical engineers at the time, he was frustrated by how long it took to make electrical connections between parts made of different materials. The huge size of devices relying on thousands of parts and connections was also a problem in the electronics industry. Kilby began to think about making all of the individual components of a circuit out of a single block of material. When he first started working at Texas Instruments in 1958, the company had a policy of a company vacation in July, when everyone with vacation time took it and the company essentially shut down for a few weeks. As a new employee, Kilby had no vacation time coming. He used the time alone to think about more efficient engineering of the miniaturized circuits he had been hired to develop. He designed an integrated circuit out of a single unit of silicon. As a semiconductor allowing electricity to pass through it, silicon could contain within it all the parts and connections of a circuit. Although the semiconductor material might be more expensive than the materials usually used for parts other than the transistors, the end result of integration would be far less expensive than having to set up separate production processes for all the component parts. Other engineers were also working on integrated circuits, and Kilby shared the honors of co-invention of the microchip with Robert Noyce of Fairchild Semiconductor.

Kilby built the first computer using integrated circuits at Texas Instruments in 1961. Six years later he and two co-workers invented the first pocket calculator to show how useful integrated circuits would be in daily life, not just powerful government or military applications. By the time Kilby left Texas Instruments in 1970 to become an independent inventor, he was widely recognized for his engineering knowledge and creative inventions. In 1978 he became a professor at Texas A & M, retiring in 1984. Kilby holds more than 60 patents on various inventions. In 1982 Kilby was elected to the National Inventors Hall of Fame. He received the National Medal of Science in 1970, the prestigious IEEE Medal of Honor in 1986, the National Medal of Technology in 1990, and the Nobel Prize in Physics in 2000. Kilby’s work and contributions inspired the IEEE to name one of their most prestigious awards after Kilby. The award is given to those who, like Kilby, make outstanding contributions to the field.

Retrieved from "https://ethw.org/w/index.php?title=Jack_Kilby&oldid=146159"
Categories:
This page was last edited on 29 January 2016, at 16:10.
About ETHW
Policies and disclaimers