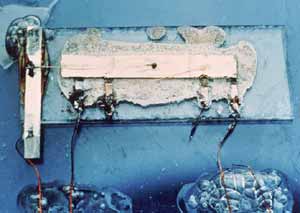 An integrated circuit is a thin slice of silicon or sometimes another material that has been specially processed so that a tiny electric circuit is etched on its surface. The circuit can have many millions of microscopic individual elements, including transistors, resistors, capacitors, and conductors, all electrically connected in a certain way to perform some useful function.

The first integrated circuits were based on the idea that the same process used to make clusters of transistors on silicon wafers might be used to make a functional circuit, such as an amplifier circuit or a computer logic circuit. Slices of the semiconductor materials silicon and germanium were already being printed with patterns, the exposed surfaces etched with chemicals, and then the pattern removed, leaving dozens of individual transistors, ready to be sliced up and packed individually. But wires, a few resistors and capacitors might later connect those same transistors to make a circuit. Why not do the whole thing at one time on that slice of silicon?

The idea occurred to a number of inventors at the same time, but the first to accomplish it were Jack Kilby of Texas Instruments and Robert Noyce of Fairchild Semiconductor Incorporated. The idea caught on like wildfire because the integrated circuit had many of the advantages that had made the transistor attractive earlier. These advantages included small size, high reliability, low cost, and small power consumption. However, these circuits were difficult to make because if one component of the chip was faulty, the whole chip was ruined. As engineers got better and better at squeezing more and more transistors and other components onto a single chip, the problems of actually making these chips increased. When the transistors were shrunk down to microscopic size, even the smallest bit of dust could ruin the chip. That's why today, chips are made in special "clean rooms" where workers wear the "bunny suits" that we often see on TV.

Compared to the original integrated circuit, which was a simple device with just a few components, the number of components on today's' integrated circuits is amazing. In the 1960s, an engineer named Gordon Moore predicted that the number of elements on a chip would double every year (later revised to every two years) into the foreseeable future. "Moore's Law" has held true so far. By the beginning of the twenty-first century, the Intel Pentium chip had over 100 million transistors on it, with the total number of components including resistors, capacitors, and conductors being even larger.

Retrieved from "https://ethw.org/w/index.php?title=Integrated_Circuits&oldid=157382"
Categories:
This page was last edited on 23 November 2017, at 06:45.
About ETHW
Policies and disclaimers