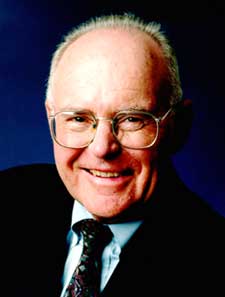 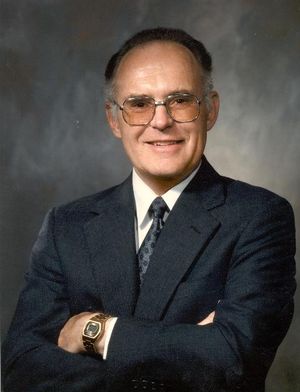 Silicon Valley founding father Gordon E. Moore is a seminal figure in the history of computing. A successful engineer, entrepreneur, and manager, Moore is best known for three things: membership in the “Traitorous Eight”; cofounding Intel, Corporation; and being the prognosticator of “Moore’s Law,” which has been an inspiration for the semi-conductor industry for over 40 years.

Moore was born on 3 January 1929 in San Francisco, California and spent his early years in the pastoral town of Pescadero, before his family moved to another Northern California town called Redwood City. As a child Moore developed a liking for mathematics and an interest in chemistry. Although he was a good student, throughout much of his high school career Moore was more interested in playing sports than hitting the books. It wasn’t until his senior year that he became serious about academics.

Upon graduation from Sequoia High School, Moore matriculated at San Jose State University, becoming the first member of his family to attend college. After two years at San Jose State he transferred to the University of California at Berkeley where he took a degree in Chemistry. He then went on to obtain a doctorate in Physics and Chemistry at CalTech.

Although Northern California is now an epicenter of technology, when Moore was finishing graduate school there were few high tech jobs available. He moved his family east to Maryland, where he took a position at Johns Hopkins University. As a researcher, Moore enjoyed his work, but the pragmatic side of his nature clashed with the university research culture: Moore wanted his work to result in something practical and useful.

Opportunity knocked in the person of William Shockley, the brilliant but contentious Bell Labs physicist who had co-invented the transistor in 1947. Shockley was ready to leave Bell Labs, return to his Northern California roots, and launch his own semiconductor business, Shockley Semiconductor. He amassed a team of brilliant specialists, and Moore was brought in as a chemist. This golden opportunity for Moore, however, was soon tarnished. As a manager Shockley proved to be difficult, secretive, and distrustful. Not surprisingly, this created problems for his staff and many at the company grew dissatisfied. Moore and a group of seven others, who would become known as the “Traitorous Eight” or “the Fairchild Eight,” decided enough was enough and left Shockley to launch their own company. With a $500 investment from each man and backing from Fairchild Camera and Instrument, Fairchild Semiconductor Corporation was born in 1957.

At Fairchild, Moore and his compatriots did a lot of pioneering work, but by far the most important was the creation of the integrated circuit, a thin slice of silicon that has been specially processed so that a tiny electric circuit is etched on its surface. The circuit can have many millions of microscopic individual elements, including transistors, resistors, and capacitors, all electrically connected in a particular way to perform some useful function. The IC was the brainchild of another of the Traitorous Eight, Robert Noyce (although Jack Kilby at Texas Instruments also developed an IC at virtually the same time as Noyce).

Although the environment at Fairchild was a major improvement over working for Shockley, Moore grew unhappy with the parent company’s management. He and Robert Noyce decided to branch out on their own to make semiconductors. By July of 1968 Moore and Noyce had formed a new semiconductor company, which they called Intel. It was at Intel, in 1971, that the very first microprocessor, the 4004, was created. Since then, Intel has been the industry leader in producing ever-faster microprocessors. This is due, in large part, to “Moore’s Law,” Moore’s prediction that the number of transistors and other components that could be economically placed on a chip would double every year (the “law” was later revised to every 18 months).

Moore has been richly rewarded for his hard work and risk taking. Intel Corporation became one of the largest manufacturers in the semiconductor industry. Moore is an IEEE Fellow, a member of the National Academy of Engineering, and winner of the National Medal of Technology, the Franklin Institute’s Bower Leadership Award, and the Presidential Medal of Freedom. Furthermore, he received the IEEE Medal of Honor in 2008 "For pioneering technical roles in integrated-circuit processing, and leadership in the development of MOS memory, the microprocessor computer and the semiconductor industry.”

Retrieved from "https://ethw.org/w/index.php?title=Gordon_E._Moore&oldid=157015"
Categories:
This page was last edited on 9 November 2017, at 13:44.
About ETHW
Policies and disclaimers