IEEE Hungarian Section was funded in 1987. Academician T. Vámos was its first chairman.

By the help of the Hungarian Academy of Sciences the problem of the membership fee’s payment caused by the non convertibility of the domestic currency could be resolved.

In 1993 chairman T. Roska opened the local office of IEEE int he presence of Region 8 Director Charles Turner. Until the closure of the office due to the high rent, it served the local members with a wide choice of information material.

In the 1990-s MOU-s were signed with the Hungarian sister societies on the cooperation and reduction of membership fees. The list of the sister societies included: John von Neumann Computer Society (NJSZT), Hungarian Electrotechnical Association (MEE), Scientific Society for Measurement, Automation and Informatics (MATE) and Scientific Association for Infocommunication Hungary (MATE).

In the 1990-s under the chairmanship of I. Fodor the legal status of the Hungarian Section was settled and the Society of Electrical Engineers Hungary/ IEEE HS was registered. 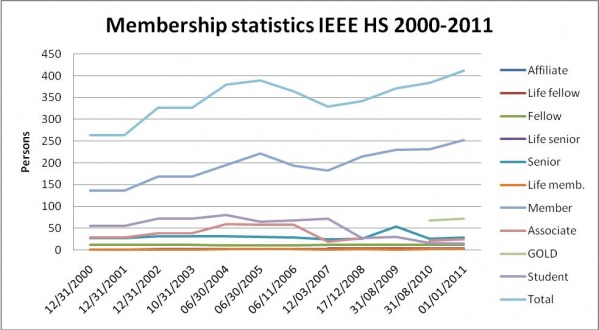 Graphic representation of membership, including students and higher levels

A 6 months newsletter was published in internet for the HS membership. Some news was sent to R8 news too.

A new Student Branch chapter has been established by students of IEEE IAS & PES Society chapter in Hungary.

Three delegates from Hungary participated in the IEEE Region 8 Student Branch & GOLD Congress 2010 which was held between 4-8 August in Leuven. Richard Cselkó, Bálint Németh and Beáta Polgári were in Belgium to get to know other student branches, GOLD and student members, take part in various workshops and socials programs and also learn the IEEE.

Following the successful TEP initiative in Russia in the last year, at 18th of June, 2010 in Budapest, Hungary, Óbuda University hosted IEEE HS Technical English Program Workshop. Prof. Imre Rudas, rector of Óbuda University, chair of IEEE HS welcomed the event. Students become aware of the benefit of their English knowledge, they got encouragement to use and develop the existing English practice. The exercise solution was organized into 4 groups, each group has been moderated by a volunteer. The oral result presentation was evaluated by the other groups. In the first block some math-, comprehension exercises and advanced algebraic examples were solved. Peter Kadar IEEE HS vice chair presented the benefits and opportunities of IEEE, Peter Farkas from Slovakia introduced the IEEE Czechoslovakia Section. In the "black box" exercise the task is to imagine how a "machine" should work with given in- and output. The student designed the main modules of the "box", explained the operation itself, what is happening "inside the box" and drew a block diagram of the process. In the "business" exercise the groups are divided in two parts. The "sellers" proposed the defined service by listing arguments. The potential "buyers" had to find arguments against purchasing the service. The "pros" and "cons" was presented in the form of a free conversation between the two groups. The participants received certificate about the participation. In the feedback all the student welcomed the possibility of use their English, some of them liked more technical presentations too.

Retrieved from "https://ethw.org/w/index.php?title=IEEE_Hungary_Section_History&oldid=186758"
Category:
This page was last edited on 30 November 2021, at 18:56.
About ETHW
Policies and disclaimers