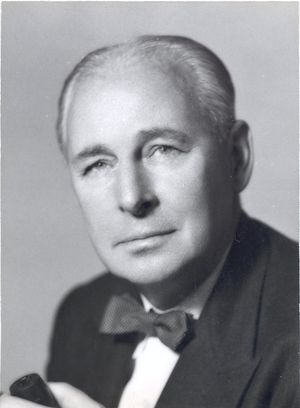 Lloyd V. Berkner, IRE President, 1961, was the head of the Section on Exploratory Geophysics of the Atmosphere at Carnegie Institution. Under his presidency of the Associated Universities, Inc., the organization built the National Radio Astronomy Laboratory in West Virginia.

Lloyd V. Berkner was born February 1, 1905, in Milwaukee, Wisconsin. He was raised in Sleepy Eye, Minnesota and as a boy developed an interest in amateur radio.

Berkner was a man of great energy and many interests. He went to University of Minnesota and studied electrical engineering, receiving his BSEE in 1927. However, while in college he also joined the Naval Aviation Reserve, learned to fly, and developed a radio-communication device for small aircraft. Additionally, he was engineer-in-charge at radio station WLB-WGMS in Minnesota, which was established with the help of the university’s experimental radio station. While Berkner was unable to find the time to complete a PhD, over the course of his career he was awarded many honorary doctorates from universities worldwide.

For one year after graduation he worked as an electrical engineer for the Airways Division of the U. S. Bureau of Lighthouses. He then moved to the Bureau of Standards and was appointed an engineer with the first Byrd Expedition to the Antarctic in 1928-30. There he helped set up critically important radio communication then settled for a few years in New Zealand to support the Antarctic communication and study long distance radio signal strength. His important role in Byrd’s expedition was recognized when an island in Antarctica was named Berkner Island in his honor.

For three years after the work with Byrd, Berkner was on the staff of the National Bureau of Standards. While there, he got major funding for an important study of the ionosphere. When the unstable economy of the Depression disrupted that study, he began work as a physicist with the Department of Terrestrial Magnetism of the Carnegie Institution of Washington.

It is not surprising that Berkner would have been involved in America’s war efforts. From 1940-1941 he was a consultant to the National Defense Committee. In 1941 the engineer-aviator was called to active duty as head of the Radar Section, Bureau of Aeronautics. Berkner supplied Naval aircraft with radar as quickly as he could and actively supported the development of improved airborne radar. He directed the Bureau's Electronics Material Branch from 1943-1945, and served on the U.S.S. Enterprise in 1945. In recognition of his military service, after 1965, he held the rank of Rear Admiral, USNR.

After his war service, he was made head of the Section on Exploratory Geophysics of the Atmosphere at the Carnegie Institution, from 1947- 1951. During these years he worked tirelessly to improve the relationship between the government and the scientific community. In 1951 he became President of Associated Universities, Inc., New York, an educational institution that operated research facilities of nine northeastern universities. Under his tenure, AUI was involved in significant numbers of defense related studies and built the National Radio Astronomy Laboratory in West Virginia.

Berkner proposed, in 1950, the International Geophysical Year for 1957-58, a year of sun spot maximum. This project would become the first of the great international programs in geophysics and demonstrated that international cooperation in solving problems of global science could succeed. Much of America’s space research was born out of this moment.

Berkner joined Texas Instrument in 1957 and, seeing a lack of graduate technological education in the southwest, helped develop the Graduate Research Center at Southern Methodist University. Unfortunately, a severe heart attack in 1964 caused him to curtail his work there before the center reached full success.

Over the course of his career, Dr. Berkner held numerous offices and advisory positions in government, industry, and education. In the State Department he served as Special Assistant to the Secretary of State, and Director of the Foreign Military Assistance Program in 1949, and Chairman of the International Science Steering Committee which produced the report "Science and Foreign Relations."

He was married to Lillian Fulks Berkner and had two daughters, who frequently traveled the world with him as his work required. He died in 1967 in Washington, D.C.

IEEE Merger Collection - a collection of documents related to the merger between AIEE and IRE, in which Berkner played a significant role

Retrieved from "https://ethw.org/w/index.php?title=Lloyd_V._Berkner&oldid=146527"
Categories:
This page was last edited on 3 February 2016, at 17:18.
About ETHW
Policies and disclaimers