Garrett Augustus Morgan patented several inventions over the course of his lifetime, gaining recognition for making American streets safer with his invention of the traffic signal. One of eleven children born to former slaves in Paris, Kentucky, Morgan divided his time as a child between school and work on the family farm. Like many other African Americans during and after the turn-of-the-century, he migrated north in hopes of finding better opportunities than what was afforded him in the South. At age fourteen, Morgan left Kentucky and moved first to Cincinnati, then Cleveland, Ohio, where, after earning money as a handyman, he opened a sewing machine store and repair shop in 1907. Though his formal education had ended with elementary school, he continued his pursuit of knowledge, even hiring a tutor in English grammar once he was established in Ohio. In 1908, he married Mary Anne Hassek, and shortly thereafter he developed his first invention, a hair straightening cream which he called the G.A. Morgan Hair Refining Cream. Morgan sold and marketed this product through his successful, newly incorporated business, the G.A. Morgan Refining Company. 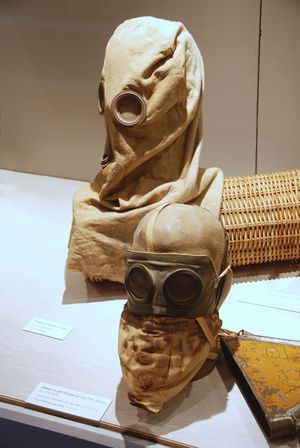 In 1912 Morgan patented his "Safety Hood," later popularly known as the gas mask. The breathing device consisted of a hood, filtered air intake tube, and a second tube that allowed air to be exhaled out of the hood. Morgan's device, intended for use by firemen, scientists, and workers who were forced to breath fumes or dust, won first place at the Second International Exposition of Safety and Sanitation. The "Safety Hood" later proved its mettle in its first "real life" demonstration when used by Morgan and his brother to rescue a number of workers when a tunnel exploded under Lake Erie. The incident, widely publicized in the media, brought considerable acclaim to both Morgan and his invention. Orders for the device soon came pouring in from fire departments across the country; many of these orders were later canceled when it was revealed that Morgan was African-American. However, the use of poisonous gas in World War I soon provided another practical use for the device, and the army purchased thousands, saving the lives of countless soldiers and proving quite lucrative for Morgan in the process.

Morgan next invented a signal to improve the safety of urban traffic during a time when pedestrian deaths had reached an all-time high. After witnessing an accident between an automobile and a horse-drawn carriage, Morgan decided to develop a means of automatically directing traffic that would be more cost-efficient than placing a police officer at every intersection. The traffic signal Morgan created, patented in the U.S. on November 20, 1923, and in Great Britain and Canada shortly thereafter, consisted of a T-shaped pole with three positions: "Stop," "Go," and a third position that halted traffic in all directions to enable pedestrians to safely cross the intersection. Morgan sold the rights to his invention, upon which today's traffic signals are still based, to the General Electric Company for $40,000, an astronomical sum at the time. Morgan's traffic signal brought him both wealth and public recognition, with fellow businessmen including John. D. Rockefeller and J.P. Morgan praising his ingenuity. Morgan deployed this status to help Cleveland's African-American community and to further the cause of racial equality. Shortly after receiving a commendation from the U.S. Government for his contribution to public safety, Garrett A. Morgan died at the age of 86.

Retrieved from "https://ethw.org/w/index.php?title=Garrett_A._Morgan&oldid=145850"
Categories:
This page was last edited on 26 January 2016, at 15:29.
About ETHW
Policies and disclaimers