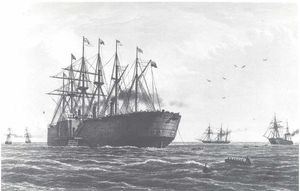 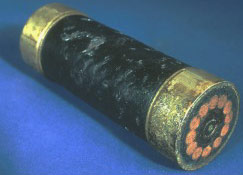 A snippet of the 1866 trans-Atlantic telegraph cable. The Great Eastern was the only ship big enough to carry the vast amounts of cable needed for the job. Courtesy: The Smithsonian Institution. 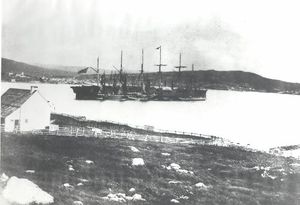 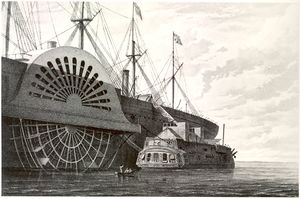 The Great Eastern, launched in 1858, was a huge steamship designed by the brilliant engineer Isambard Kingdom Brunel. As well as being famous for his work on railways, Brunel was also interested in using steam to power iron ships. The Great Eastern was the third of his huge shipbuilding projects.

One of the biggest problems with steam power in its early days was that it was difficult for ships to carry enough coal to reach their destinations. There might not be enough places on the ship’s route where they could pick up extra coal if needed. Sometimes the coal took up so much space that there was hardly any room left for cargo! Because of this the early steamships still had masts (Great Eastern had six) and sails, which meant the ship could sail even if the coal ran out. Brunel believed, however, that he could solve the coal problem by building a ship so enormous that it could carry enough coal for a voyage to India or Australia without stopping for coal along the way. Great Eastern was 211 meters (693 feet) in length and was designed to carry 4,000 passengers, or 10,000 soldiers if used to carry troops.

Work began on the ship in 1854. There were many problems in building and launching the ship and the Great Eastern was not finally afloat until January 1858. Brunel never saw it sail—he suffered a severe stroke just before the ship was due to leave on its first voyage from Liverpool. By the time the ship arrived in New York ten days later, he was dead.

In 1864, Great Eastern was sold for a fraction of its cost to a company helping to lay the first undersea telegraph cable between England and the United States. Great Eastern was the only ship afloat that had enough room to carry the cable. The time that the ship spent laying cables for the new telegraph system was its most successful.Great Eastern successfully laid the cable, which began operation in July 1866.

The Great Eastern was finally broken up in 1888. The ship was built so strongly that it took 200 men two years to dismantle it. Sir Daniel Gooch, the engineer in charge of laying the Atlantic cable in 1866, wrote “Poor old ship: you deserved a better fate.”

Retrieved from "https://ethw.org/w/index.php?title=Great_Eastern&oldid=120064"
Categories:
This page was last edited on 15 September 2015, at 17:30.
About ETHW
Policies and disclaimers