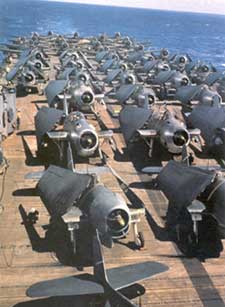 Aircraft lined up and awaiting deployment on the USS Yorktown.

Many of World War II’s greatest battles were fought at sea, making naval technologies crucial to all sides. Many kinds of ships, such as battleships, submarines, and aircraft carriers, had been used in previous wars, but the global nature of World War II made naval battles especially important. These vessels ranged from heavily armed warships to numerous support craft such as fuel ships and troop landing boats. Of all the ships used in the war, aircraft carriers were the largest.

An aircraft carrier is a ship whose primary purpose is to bring airplanes closer to distant battle areas. Since most World War II aircraft had a range of just a few hundred miles, it was necessary to bring the aircraft to the battlefront, and using a ship to do so made a lot of sense in the Pacific where much of the fighting took place on islands and coastal areas.

The first true aircraft carriers were built by the Japanese in the 1920s. Japan remained an innovator in aircraft carrier design and construction during the years leading to World War II, operating nine of them by 1941. Their largest carriers of the war were the Akagi and Kaga, each capable of launching over 90 aircraft. The Allies, however, also had extremely effective carriers. British ships, such as the Ark Royal and the Eagle, and American ships, such as Yorktown and Enterprise, each carried 100 aircraft or more. The largest aircraft carriers, such as the Enterprise were over 800 feet (245 meters) long and 100 feet (30 meters) wide, and carried almost 3,000 crewmembers. 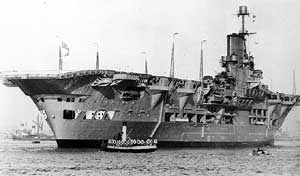 The first aircraft carriers had evolved from ordinary naval ships, which were fitted with landing strips built on their decks. By World War II, however, most aircraft carriers were designed for this purpose from the beginning. Small aircraft were usually stored below the deck and taken to the landing strip on elevators. Because the strip was short, a catapult (usually a piston-type device driven by steam from the ship’s boilers) helped launch the craft into the air. U.S carriers used a hook on the bottom of the plane to catch a wire, strung across the deck, which helped bring the plane to a halt. A central control tower located to the side of the landing strip housed advanced radio communication and radar equipment used to keep in touch with aviators and track both friendly and enemy craft. Although the airplanes carried on these ships were not large enough to sink the larger “capital” ships (such as battleships) at the beginning of the war, rapid improvements in carriers led to their becoming the major offensive naval weapon by 1945. 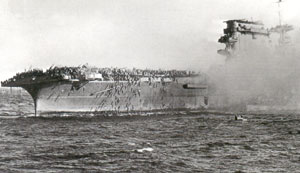 The sinking of the USS Lexington during the Battle of the Coral Sea. Crewmen can be seen jumping overboard to escape the burning vessel.

The effectiveness of large aircraft carriers was demonstrated early in the war, when dozens of Japanese fighters and bombers, launched from aircraft carriers, decimated the U.S Pacific fleet at Pearl Harbor, Hawaii in late 1941. In May of 1942, aircraft from Japanese and U.S carriers battled at the Coral Sea, the first naval conflict where the opposing ships did not make contact. This battle resulted in the sinking of the Lexington. The Japanese Navy also took heavy losses, most notably at the Battle of Midway in June 1942. There they lost four carriers and hundreds of airplanes—its naval power declined steadily after that. By contrast, ship production in the U.S accelerated dramatically in 1944 and 1945, when dozens of aircraft carriers (and other ships) were completed. Most came too late to make a major difference in the war, and many ships on order were cancelled at the end of the war in mid-1945.

Today, nine countries possess aircraft carriers, although the United States and Great Britain are the only military forces that rely heavily on them. The Royal Navy currently has three, and the U.S 12.

Retrieved from "https://ethw.org/w/index.php?title=Aircraft_Carriers_in_World_War_II&oldid=154715"
Categories:
This page was last edited on 12 April 2017, at 13:51.
About ETHW
Policies and disclaimers