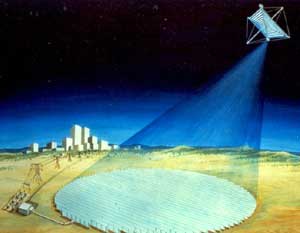 This drawing shows how power collected by solar-power satellites might be beamed to a receiving antenna on Earth. The antenna would convert the energy back into electrical current, which would be fed into the power grid. Courtesy: Space Studies Institute.

The sun powers the biosphere, which is to say that the energy used by almost all plants and animals comes from the sun. So why not use solar energy to power industry, transportation, and the home as well? Well, a principal difficulty with solar power is that the sun doesn't always shine on a particular location: half the time the earth blocks the sun, and for much of the remaining time clouds and fog do. But what if the solar energy were collected by a set of satellites above the earth’s atmosphere? Then we might obtain solar power for 24 hours every day of the year. This is the idea behind solar-power satellites.

A satellite with solar panels to convert light energy into electricity can be put into orbit. Indeed, most satellites in orbit today are powered by solar panels. But how can we get the energy from the satellite back to earth? Clearly it would be impossible to use the electric lines we use for long-distance power transmission on earth. This is where microwaves come in.

It was during the late 1960s that the engineer Peter Glaser first had the notion of solar power satellites. The principle of transmitting power by microwaves had already been demonstrated, though not put into practice. (Microwaves in practical devices, such as radar systems and long-distance telephone relays, were used to convey information.) To convey information, the intensity of the received signal need only be less than one nanowatt (one billionth of a watt). Glaser’s idea was to put the solar-power satellites in geosynchronous orbits, so that each would hover over a single location on the earth. This meant, however, that the satellites had to be very high (36,000 kilometers or about 22,000 feet), and this in turn meant that the antenna on the satellite and the receiving antenna on the ground had to be extremely large (a kilometer or more in diameter). The idea did not seem practical, and after some initial funding by the U.S Department of Energy and NASA there was little interest in pursuing the technology.

Today, however, the situation is changed because of the very large number of communications satellites in low orbits. It might be possible to make these satellites dual purpose—solar-energy collectors as well as communications devices. Because of the much lower orbits, the antennas on the satellites and on the ground need not be nearly so large. A drawback however, is that satellites in low-earth orbit circle the earth rapidly (about every 90 minutes) and therefore do not provide a connection for a very long time. There are also other concerns. One is that the transmission down to the ground might be interrupted by clouds and weather. Another is the safety of the people and animals near the receiving antennas who might be exposed to the microwave radiation. Today, the viability of solar-power satellites as a long-term solution to our energy needs is being investigated by government agencies and individual companies in many countries.

Retrieved from "https://ethw.org/w/index.php?title=Solar_Power_from_Satellites&oldid=120311"
Categories:
This page was last edited on 28 September 2015, at 19:14.
About ETHW
Policies and disclaimers