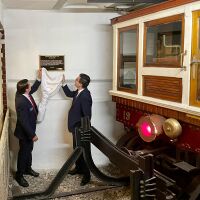 In 1896, Budapest Metro Line No. 1 was inaugurated, the first underground railway designed specifically to use electric power, rather than adapted from steam-powered systems. It offered several innovative elements, including bidirectional motor carriages, the “goose neck chassis,” and electric lighting in the stations and carriages. This line's design influenced later subway construction in Boston, Paris, Berlin, and other metropolitan areas worldwide.

In the center of Budapest a busy underpass makes possible to (1) cross the street (2) to reach stations of metro No.1. and No.2. and (3) to enter to the Budapest Underground Museum.Thera are many stairsways from different directions to reach this level.The Museum has an entrance Hall (cca. 100 sqm) with guard and continuous surveillance. The Museum space is a 60 m long and 6 m wide underground station with illumination, with carriages, with relicts.

The plaque will be mounted close to the oringinal plaque about the inauguration of the Metro in 1896.This site is double guarded, at the entrance of the museum. The museum visitors can see it.

The Budapest Metro Line No.1, the first continental underground electric tramline, was constructed for the celebrations of the thousand year anniversary of the Hungarian statehood and Millennia World Fair in 1896. The cut-and-cover tunnel method was used with a flat roof with steel beacons support, instead of a brick arch resulting in a low tunnel height. The carriages were characterized by low floor height do to the “goose neck” chassis. The technics served as a reference, muster and standard during the construction of Boston, Paris and Berlin metro. The project included several innovations of electrical engineering, partly pioneered by Siemens like the traction system. Novelties were the bidirectional motor carriage with two driver’s cabins, where the boogie included the motor and the overlapping rail jointing for smooth gliding. It was the first application of underground trolley system. The Budapest Metro line No. 1 has been in operation since its inauguration, for more than 120 years. The Underground Railway Museum (URM) with three original wagons has been open to the public in a non-used tunnel part since 1975. The Budapest metro line No.1. became part of the World heritage in 2002, together with the avenue above it called “Andrássy street”.

II. The contribution of the Budapest metro to technological innovation

The first Budapest underground line combined the previous worldwide good practices, as electric traction motors, electric railway security signalization, electric lighting in the stations and the carriages. At the same time it abandoned the clutch-and-cable system, the gas fired lightings. Several new ideas were put into practice, such as the trolley current collector instead of the third rail system, the cut-and-cover construction instead of deep-level tunnel drilling and instead of independent locomotives the electric traction motors are built in the carriage’s bogies. The construction became a muster for the New York, Boston, Paris, Berlin and Buenos Aires metros.

III. Historic background of building the Budapest Metro line No.1.

In the second half of the 19th century Budapest became a metropolis. In 1873 it had more than 300.000 inhabitants, this number doubled in the next two decades. Huge infrastructural investments formed the city into the present tourist-luring townscape. In 1875 a new representative avenue was built between the center and the city park. For esthetic reasons no horse-pulled or electric tram line construction was allowed in this street. In 1896 the country celebrated the thousand year anniversary of the Hungarian statehood, and the city park was selected as the celebrations’ venue. The decision makers were pressed to seek for appropriate mass transport solutions and the mayor’s office wanted to raise the glare of the feast with an up-to-date technical solution.

The monopolistic horse pulled tramway company Budapesti Közúti Vaspálya Társaság (BKVT) had operated with 700 horses since 1860 but was not open for any innovations. In 1887 a 1000 m track was been built by Siemens

The Budapest metro is the first commercial electrified underground train in the European continent. It has been in continuous operation since 1896. This achievement was a complex innovative solution of several engineering branches because

The successful realization took only 21 months. The memories of early underground transportation have been carefully preserved for the future. The Underground has a well-shaped museum – close to the operating system. The project was performed by international cooperation.

Peter Kadar: The Drive and the Electrical Appliances in the Budapest Metro 120 Years ago

Sabine Dittler: The first electrically powered underground on the European continent goes into operation in Budapest

Németh János: History of Royal carriage No. 20. Budapest in 1965, manuscript

Subway - The Editors of Encyclopaedia Britannica - https://www.britannica.com/technology/subway „Many other cities followed London’s lead. In Budapest a 2.5-mile (4-kilometre) electric subway was opened in 1896, using single cars with trolley poles; it was the first subway on the European continent. Considerable savings were achieved in its construction over earlier cut-and-cover methods by using a flat roof with steel beams instead of a brick arch, and therefore, a shallower trench.”

MBTA Green Line Historic Images - Celebrate Boston www.celebrateboston.com/mbta/green-line/tremont-street-subway.htm „Boston built the first subway in North America. Trolley car grid-lock and street congestion on main thoroughfares motivated the Massachusetts Legislature to authorize the construction of the subway. It opened on September 1, 1897. …….. The "cut and cover" method of construction was used, with a deep trench dug or "cut" on Tremont Street, and a steel structure built around it and then filled in or "covered up." The Budapest Subway, and the later Paris Metro, were visited by the Boston subway designers.”

„After considering various alternatives to ease congestion on Boston's streets, city officials decided to follow the example of London, Glasgow, and Budapest and build an underground system.”

Tremont Street subway https://en.wikipedia.org/wiki/Tremont_Street_subway „The Tremont Street subway in Boston's MBTA Subway system is the oldest subway tunnel in North America and the third oldest still in use worldwide to exclusively use electric traction (after the City and South London Railway in 1890, and the Budapest Metro's Line 1 in 1896), opening on September 1, 1897.”

The Milleneum Subway Line of Budapest by Varga Ákos Endre; http://hampage.hu/kozlekedes/fav4/e_index.html as it on 30/06/2015

Fig.4. Wood covered carriage No.11. in nostalgia operation on 2nd of May 2016 - Photo Gabor Lovas

Peter Kadar: The Drive and the Electrical Appliances in the Budapest Metro 120 Years ago