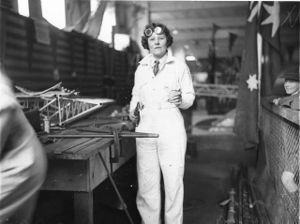 May Bradford was born in 1897 and grew up in Rubyvale, Queensland, Australia. While employed at a hotel in Emerald, Queensland, Bradford became interested in aviation after overhearing a conversation about aviator Amy Johnson. She soon moved to Brisbane and completed a flying course taught by the C.W.A. Scott and L.J. Brain at the Queensland Aero Club. Bradford almost ran out of funds and temporarily returned to Rubyvale to sell gems in order to raise money for completion of the course. She obtained her pilot license in 1931 and at the time was the only Australian woman to hold first-class A and B pilot licenses, as well as the only Australian woman to hold A and B electrical engineering ground certificates.

Bradford was employed as a commercial pilot and in 1936 she finished the Adelaide Centenary Air Race in the plane she had built herself at the Mascot workshop.

On January 24th, 1937, Bradford, along with her two passengers Harriet Coley and Ellen Latimer, were killed during a take-off accident after her plane's wing clipped another.

Retrieved from "https://ethw.org/w/index.php?title=May_Bradford_Shepherd&oldid=155249"
Categories:
This page was last edited on 2 June 2017, at 15:50.
About ETHW
Policies and disclaimers