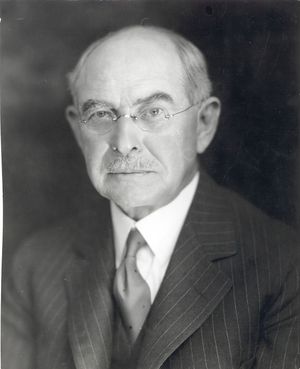 Edwin W. Rice, Jr., AIEE President, 1917 - 1918, is considered one of the three fathers of General Electric. Rice filed over 100 patents for his inventions, which include oil switches of high capacity, arc lamps, and synchronous converters among other creations.

Edwin Wilbur Rice, Jr. was born 6 May 1862, in La Crosse, Wisconsin, the son of Edwin Wilbur Rice, a Congregational minister and an editor, and Margaret Eliza Williams. His family moved to Philadelphia, where he attended the Boys' Central High School, from which he obtained the A.B. and M.A. degrees. In school he came under the tutelage of Elihu Thomson, who taught physics and chemistry. When Thomson moved in 1880 to New Britain, Connecticut, to found the American Electric Company, which manufactured dynamos and electric arc lamps, Rice joined him. Taken over in 1883 by investors from Lynn, Massachusetts, the company, under the name of the Thomson-Houston Company, moved to that city. At the age of twenty-two, Rice became plant superintendent of the company. In 1892 a merger with Edison General Electric created the General Electric Company, with head-quarters at Schenectady, New York.

Considered one of the three fathers of General Electric (along with Thomson and Charles A. Coffin), Rice was originally its technical director. He became, in 1896, vice president in charge of manufacturing and engineering, and eventually senior vice president. In 1913 he was chosen president of the company, and when he retired in 1922 was made honorary chairman of the board. His career has been described as one "devoted to making electricity understood and available," a devotion that was already discernible in his high school graduation essay on the utilization of electricity.

Rice's managerial skill and vision contributed a great deal to the organizational methods, factory routine, technical development, and engineering and scientific inventions at General Electric. He consulted with the entire engineering staff and assisted in every form of engineering development. The over one hundred patents credited to him embrace practically the whole field of electrical operations and include systems of distribution, synchronous converters, arc lamps, incandescent lamps, oil switches of high capacity, both alternating- and direct-current generators, train control systems, and transformers. During his vice presidency Rice advocated innovative forms of industrial organization and was largely responsible for his company's policy of employee representation, the recognition of the shop worker's part in the success of the company, and the importance of advancing the welfare of employees. Nevertheless labor unrest coincided with Rice's becoming president of the company. In 1913 there was a strike in Schenectady, and in 1918 the Wobblies led "walk-outs" at five company sites. In 1916 Rice told the National Industrial Conference Board that the "day of extreme individualism is past ... the time has come for co-operation in the broadest sense," and the postwar years saw the further development of the enlightened -and patronizing- company policy toward labor.

Rice added Charles P. Steinmetz, the mathematician and electrical "Wizard of Schenectady," to the engineering staff in 1893, and is credited with being a prime mover in the creation of the General Electric Research Laboratories in 1900. Rice's belief in the importance of science was further indicated when, on a trip to Germany in 1922-1923, he personally made up the year's deficit of the journal of the Mathematical Society and after his return spearheaded the financing of pure electrophysical research by General Electric and the large electrical manufacturing companies.

The recipient of many honors, Rice was elected president of the American Institute of Electrical Engineers in 1917. His tenure was marked by his championing of the establishment of engineering standards. In 1931 the institute awarded him the Edison Medal "For his contributions to the development of electrical systems and his encouragement of scientific research in industry." He was the recipient of several honorary degrees; after the Paris Exposition of 1900, France made him a Chevalier de la Legion d'Honneur; and Japan bestowed The Third Order of the Rising Sun on him in 1917. He was elected to the Royal Society in 1934.

Among the professional organizations to which Rice belonged were the American Institute of Electrical Engineers, the Illuminating Engineering Society, and two British societies, the Institution of Civil Engineers and the Institution of Electrical Engineers. He became a trustee of Union College in 1903 and chairman of the board in 1931. An ardent supporter and benefactor of the college, he was credited with invigorating its physics, chemistry and electrical engineering programs.