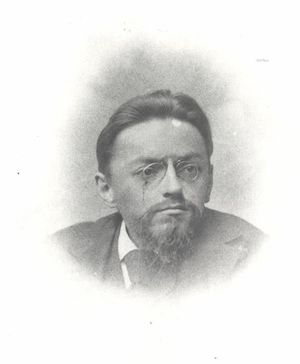 Charles P. Steinmetz, AIEE President, 1901 - 1902, worked on inventions for electric motors, generators, and street cars. In addition to his research, he was an electrophysics professor at Union University.

For more than 30 years Charles Proteus Steinmetz was a leader in the electrical industry, devoting his life to research, largely: relating to mathematical foundations upon which many of the developments in electrical engineering are based; there was scarcely a detail of any branch of electrical science or mathematics with which he was not conversant, Of his achievements among the most important were his investigations in the field of magnetism and his researches into the theory of direct and alternating current and the phenomena of lighting.

He was born on April 9, 1865 in Breslau, Germany, (modern-day Wrocław, Poland) and was educated at the universities of Breslau and Berlin, and the Polytechnic in Zurich, Switzerland, specializing in mathematics, electrical engineering, and chemistry, and teaching mathematics at the same time. At 24, he left Germany because his socialistic affiliations barred him from preferment, and came to the United States practically penniless and knowing almost no English. Later he was naturalized, and became interested in politics in Schenectady. During a Socialist regime he was appointed president of the board of education of that city in 1912 and held the position throughout succeeding administrations until his death on October 26, 1923.

The first job he obtained was as draftsman at the Osterheld and Eickemeyer factory in Yonkers, N. Y.; soon he was given charge of all the new and experimental work in the establishment. Besides working on inventions for electric motors and generators and electric street cars, Doctor Steinmetz attracted attention by articles he contributed to scientific papers here and in Germany, especially on the theory of alternating currents. He was put in charge of the research laboratory and began to specialize on magnetic testing. In 1892, the firm merged with the General Electric Company and he was sent to Lynn, Mass.; the next year he was transferred to Schenectady as chief consulting engineer, remaining in that position until his death. In 1902 he became also professor of electrophysics at Union University.

He possessed a marvelous insight into all scientific phenomena and an unequaled ability to explain the most difficult and abstruse problems by systematic mathematical methods. He expressed his desire to communicate his fundamental knowledge to others in the sfimulating instruction he gave to his assistants at the General Electric and in the publication of a large number of scientific papers and electrical books, which have long been accepted as standard textbooks in colleges, laboratories, and workshops.

Doctor Steinmetz served the Institute as vice-president (1896-98), manager (1892-95; 1898-1901) and as committeeman at various times; he also contributed papers frequently to Institute meetings and publications, his first, in 1892, "On the Law of Hysteresis," marking a new epoch in electrical science. He was a member of numerous scientific and educational organizations. He received 2 honorary degrees, the A.M. from Harvard (1902) and Ph.D. from Union (1903).

The IEEE Charles Proteus Steinmetz Award is given in his honor.

Retrieved from "https://ethw.org/w/index.php?title=Charles_Proteus_Steinmetz&oldid=176710"
Categories:
This page was last edited on 4 September 2019, at 17:07.
About ETHW
Policies and disclaimers