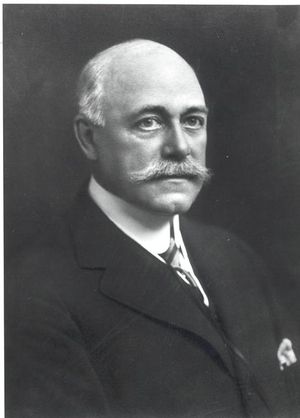 T. Commerford Martin, AIEE President, 1887 - 1888, editor of electrical magazines and an author of various works. He also worked for the U.S. Census Office from 1900-1915, where he wrote reports about electrical industries and utilities.

FOR its third president the Institute chose an editor of electrical magazines, author, and association executive. He was Thomas Commerford Martin, who assumed the presidency of the Institute at the age of 30.

Mr. Martin was born in London, England, July 22, 1856. Owing to the relation of his father to the pioneer submarine cable industry, the boy had the unique experience of spending much of his time on the historic cable-laying steamship "Great Eastern" and of making the early acquaintance of Professor William Thomson (Lord Kelvin). Although educated as a theological student, Mr. Martin came to the United States in 1877; entering the service of Thomas A. Edison that year, he had much to do with several famous inventions, and wrote many articles in the New York papers on them, notably on the telephone, microphone, and phonograph. Due to ill health, he resigned in 1879 and went to the West Indies, where he undertook journalistic adventures and work for the Government of Jamaica. Returning to New York in 1882, he edited The Operator, and in 1883, as one of the editors of the Electrical World, got out its first issue practically single handed. He remained as its editor for 26 years.

Then, in 1909, he was elected secretary of the former National Electric Light Association, which he had helped to found in 1885. On account of impaired health, he resigned in 1919, becoming advisory secretary. His annual report on the progress of the industry was for many years a leading feature of N.E.L.A. conventions. In 1923 he also became secretary of the New York Electrical Society, of which he had been a charter member, and in 1900, its president. He died May 17, 1924.

Mr. Martin was not only very active in 1884 as a founder and charter member of the A.I.E.E. and as its acting secretary at that time, but he had served in all of its elective offices except that of treasurer. Mr. Martin was also instrumental in the purchase by Doctor Schuyler Skaats Wheeler of the Latimer Clark Library for the Institute, and the securing of the famous gift of $1,500,000 from Andrew Carnegie for the Engineering Societies Building and Engineers' Club. He served for 4 years on the 2 building committees, and as president opened the new building with Doctor Carnegie in 1907. He was president of the Engineers' Club of New York 1907-08.

Mr. Martin was the author of numerous electrical books, and contributed frequently to the leading American encyclopedias and magazines. As special electrical expert for the U.S. Census Office between 1900 and 1915, his reports on the vast range of electrical industries and utilities were of tremendous importance. He lectured widely in this and other countries. He was decorated by the French Government as Officer de l' Instruction Publique in 1907. He was one of the founders of the American Museum of Safety and of the Illuminating Engineering Society. He had represented the Institute and 3 other American societies at the Kelvin Jubilee in 1896 at Glasgow University. He was a member of several other engineering and scientific societies.