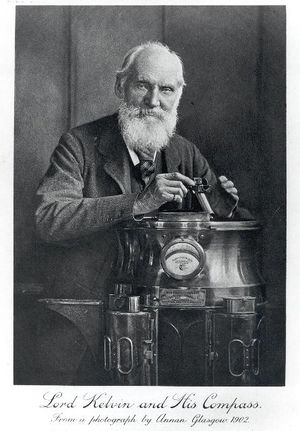 WILLIAM THOMSON, first Lord Kelvin, noted British scientist and past-president of the Institution of Electrical Engineers, Great Britain, was born in Belfast, Ireland, June 25, 1824. He graduated from St. Peter's College, Cambridge, in 1845, where he won notable honors. At the age of 22, he became professor of natural history at the University of Glasgow, and remained with that institution the rest of his life. He was elected a chancellor of the university in 1904. He was knighted in 1866, as one who had done more than any other scientific man to develop submarine telegraphy. In addition to many inventions in telegraphy, he originated the quadrant electrometer, improvements on the compass, and several other inventions. In 1892, he was made a peer by Queen Victoria, and subsequently received a great many honors. Lord Kelvin made many contributions to fundamental theory of electricity. He had a passion for the investigation of natural phenomena, and had acquired a mastery of mathematics that served him as a valuable instrument of research and partly accounted for his remarkable precision of thought. His participation in the activities of scientific and engineering organizations, long after their power to confer distinction upon him had ceased, deserves emulation. His death occurred December 17, 1907.

Lord Kelvin was elected an Honorary Member of the Institute, May 17, 1892.

Retrieved from "https://ethw.org/w/index.php?title=William_Thomson&oldid=178652"
Categories:
This page was last edited on 2 March 2020, at 16:02.
About ETHW
Policies and disclaimers