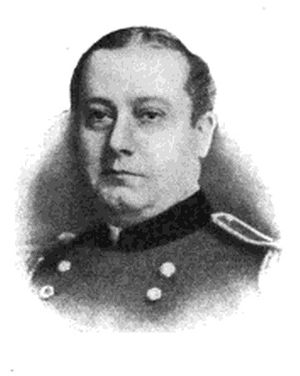 General Eugene Griffin was born in Ellesworth, ME, on October 13, 1855, and was graduated from West Point in the class of 1875, immediately becoming a Second Lieutenant in the Engineer Corps of the Regular army. In the fourteen years which followed, he rose to the rank of Captain of the corps. While on Governors Island in April, 1879, he married Miss Allie Hancock, a niece and adopted daughter of General Winfield Scott Hancock. In the following October, he resigned his post to engage in business. The outbreak of the Spanish-American war, however, called him again to service in the army, ranking first as Colonel in the First Regiment, United States Volunteer Engineers, which he organized and with which he served in Puerto Rico during 1898 and 1899. On January 21, 1899, he was made a Brigadier-General of volunteers.

Soon after writing the first American Governmental report on electric railways and as a result of his observations while a prominent member of the engineering staff of the District of Columbia, General Griffin became connected with the Thomson-Houston Electric Company, and later with the British Thompson-Houston Company. He became an expert electrical engineer, and may be said to have witnessed and directed the whole electric railway development of the old Thomson-Houston Company, and later of the General Electric Company. His brother in law, Mr. W. E. Baker, a well-known electrical engineer, was actively engaged with him in the same field through many years.

General Griffin died on April 11, 1907, shortly after 1 AM, at his apartment in the Mohawk Club, Schenectady, from apoplexy.