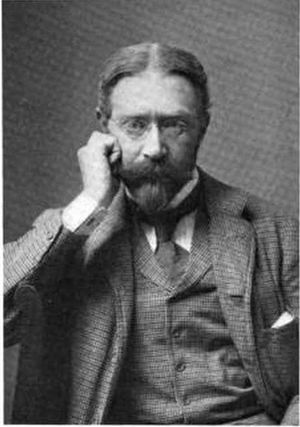 Joseph Pacifus Ord was born in Monterey, California, on April 30th, 1852. After a high school education he entered Yale University, whence he graduated in the class of 1873. After some experience in a lawyer's office in New York City, he joined the staff of the West Shore Railroad Company, and the nature of his work in the auditing department until it was taken over by the New York Central, shaped the direction of his future career.

The firm of Drexel, Morgan and Co. were at that time the financial agents of the New York Central and its subsidiary companies. They had also been closely identified with Thomas A. Edison and the various corporations through which his inventions were being exploited. The rapid expansion of these, and especially that of the consolidated manufacturing company known as the Edison General Electric Company, somewhat alarmed the big financial houses. Through one of its partners, C.H. Foster, Ord was selected as comptroller, the duties of which he assumed in 1890. Ord was not a trained accountant, nor did he make any pretensions to skill in finance, but his experience in the auditing department and a natural talent for the construction of forms and office routine, together with the ability to say "No" and stick to it, enabled him to render important service in this formative period of General Electric.

Ord was a persistent advocate of a suggested consolidation of the Edison General Electric with its aggressive rival in the electric field, the Thomson-Houston Electric Company, on the ground of economy, and in April, 1892, the General Electric Company was incorporated to take over both Companies, Ord being one of the charter-members of that corporation. His first official title was that of Comptroller, and 1894 he was made Second Vice-President, in charge of the accounting and financial departments, which office he held continuously until 1902, when he resigned, and was elected a Director. After severing his official connection with the Company, Ord entered the banking form of J. Piermont Morgan and Company. The life attracted him little, and he soon gave up the prominent position. However, he still retained his position as a Director of the General Electric Company until his death.

When Ord resigned his Vice-Presidency in 1902, General Electric had then emerged from the disastrous consequences of the panic of 1893, which had brought it to the verge of collapse. The annual reports of the Company during these nine years demonstrate how disappointing had been the result of the consolidation to begin with, how drastically the assets had to be treated, and what a lean period it was for the unfortunate shareholders, who had to submit to a grievous impairment of their capital and no dividends. During these years, Mord performed a work whose value is beyond computing. Rigorously he pursued a policy of writing down the assets to rock-bottom figures, so that a sure foundation for future operations would be reached. So confident was he that his has done done, and so sanguine was he of the future of the electrical industry, that he is said to have pledged all his available securities and all his credit for funds to invest in General Electric stock, which he kept on buying at low prices and holding, until he had become one of the largest individual share-holders of the company and had amassed a fortune.

Ord was a man of great attainments, keep in intellect, thorough in action, forceful in character. Of a critical rather than a constructive temperament, impulsive and outspoken, fearlessly truthful, he never hesitated to criticize and object to a proposed scheme of action, irrespective of whose plans might be upset thereby or whose feelings hurt, but his criticism was without malice, and his objections quickly waived when they had served his invariable purpose of eliciting a conclusive defense. His was not the well-weight decision held in suspense until the last argument, for an against, had been advanced, but rather the intuitive perception of the strength or weakness of a position, the compensating advantages or disadvantages of which, becoming more apparent to him on more mature consideration, often times changed his earlier conclusions. Possessed of a natural sense of humor and literary talents of a high order, he had the gift of witty and frequently caustic repartee.

Ord died on January 9th, 1913 at the St. Regis Hotel, New York City, after suffering for more than seven months from illness. He was a resident of Albany, NY, and was survived by his wife, Susan Vanderpoel, his daughter, Susan Vanderpoel Ord, and his sister, Mrs. Preston of Washington, DC.