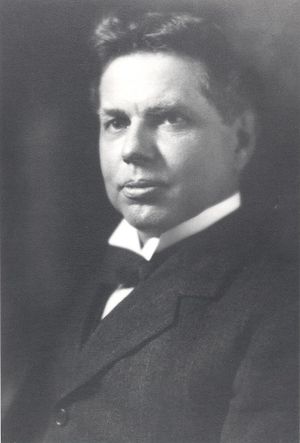 Schuyler Skaats Wheeler, AIEE President, 1905 - 1906, worked with Francis B. Crocker on small electric motors. Wheeler invented the electric fire engine, the electric elevator, and the electric fan among other inventions.

The presentation to the Institute by Schuyler Skaats Wheeler of the Latimer Clark Library in 1901, is of itself sufficient to insure Doctor Wheeler a permanent place in the role of those who have given outstanding service to the Institute. This act, however, was but one of the many contributions which he made. Durin the early development of the industry, he was responsible for many inventions and applications of electrical equipment.

Doctor Wheeler was born in New York, NY, May 17, 1860. He was educated at Columbia College, and was awarded the honorary degree of doctor of science by Hobart College in 1894, and that of master of science by Columbia in 1912. At the age of 21 he left college to become assistant electrician of the Jablochkoff Electric Light Company, and in 1882 joined the engineering staff of Thomas A. Edison in charge of work at the underground system. He installed and operated several other stations during the next 2 or 3 years and supervised an Edison plant in Newburgh, New York.

In 1886 he left the Edison Company and became connected with the C&C Electric Motor Company, which, with Charles G. Curtis and Francis B. Crocker, he helped to organize. They were the pioneer manufacturers of small electric motors.

In 1888 the firm of Crocker & Wheeler was organized, which shortly was incorporated as the Crocker-Wheeler Motor Company, of New York, and subsequently became the Crocker-Wheeler Company, of Ampere, NJ. Doctor Wheeler was the president of this concern from 1888 until the time of his death in 1923. During the many years that he was active head of the company, he was particularly prominent in development of the electric motor and its application to machine tool drives.

Doctor Wheeler was electrical expert for the Board of Electrical control of New York from 1888 until 1895. He was the inventor of many electrical and mechanical devices, such as the electric elevator, electric fire engine, series multiple motor control, and paralleling of dynamos. In 1904 he received the John Scott Medal of the Franklin Institute for the invention of the electric fan in 1886. Doctor Wheeler was 1 of the 9 incorporators of the United Engineering Society in May 1904, being 1 of the 3 representatives of the Institute. The Latimer Clark Library, which Doctor Wheeler purchased in London in 1900 had been owned by the late Latimer Clark and was the largest collection of rare electrical works in existence. Doctor Wheeler presented this library to the Institute, thus forming the foundation of the electrical section of the large library now housed in the Engineering Societies Building in New York.

It was from the presidential address of Doctor Wheeler in Milwaukee in 1906 that the ideas were taken for the "code of ethics" for electrical engineers finally adopted by the Institute's board of directors in 1912. Among the many committees on which he served was the committee on code of principles of professional conduct of which he was chairman at the time of his death. Doctor Wheeler had served the Institute as manager from 1887 until 1904, and also in 1904-05; he had served 3 years a a vice president, and was president from 1905-1906.

Retrieved from "https://ethw.org/w/index.php?title=Schuyler_Wheeler&oldid=147124"
Categories:
This page was last edited on 26 February 2016, at 18:26.
About ETHW
Policies and disclaimers