The Sea and Early Electrical Technology 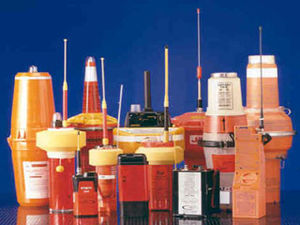 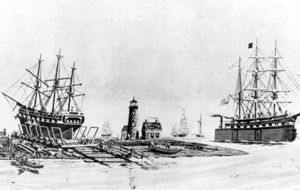 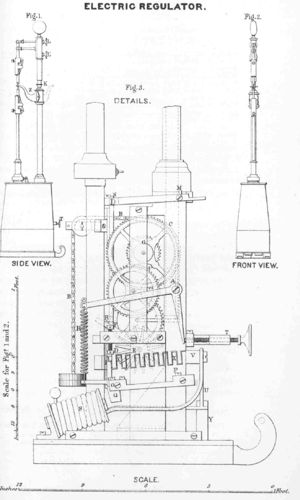 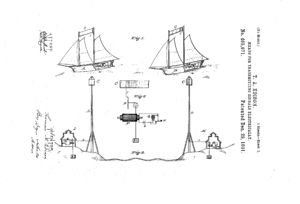 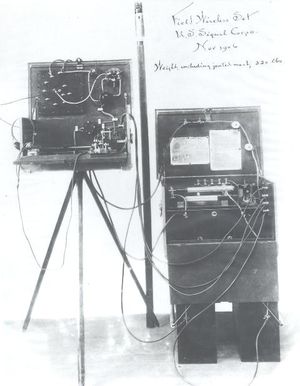 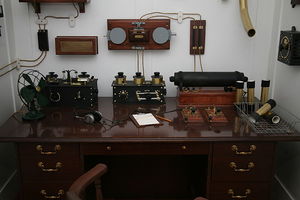 Two men employed by the Marconi Company worked in this small windowless room on the Titanic near the bridge. Their main job was to receive and send messages by radio waves using Morse code. Little did they know they would soon be tapping out one of the first SOS signals from a ship in distress. Source: http://www.flickr.com/photos/nostri-imago/3278643769/in/photostream/

This article was initially published in Today's Engineer on September 2007

The story of the sea has been a central theme in the drama of human history. And so it shouldn’t be surprising that the development of science and technology is interwoven with the story of the sea. During a recent five-week voyage from Cape Town, South Africa, to the Caribbean, I had ample to time reflect on the extent to which IEEE technologies have become embedded in maritime transport, even in relatively simple sail boats. With strong winds and all sails out, our vessel sliced through the waves as sailing ships have done for millennia. But beneath the deck lay a complex array of electrical and electronic systems: sonar; radar; GPS; electronic charts; real-time access to digital weather data; a computer system to link these systems together; an Emergency Position-Indicating Radio Beacon (EPIRB); a single-sideband radio; a phone using low-orbital satellites as communication systems; a flux-gate compass; an autopilot; running lights for night sailing; various electrical and electronic creature comforts; and, of course, batteries and an efficient, compact generator system to feed electrons to all this equipment. As impressive as this array of equipment may appear, it pales in comparison to the scale and complexity of the electrical and electronic technologies found on modern super cargo ships and naval vessels.

In today’s society, maritime commerce is out of sight and hence out of mind. But e-commerce and the global economy are held together by the world’s maritime shipping lanes. Despite the ubiquity of the electron in maritime systems, the role of the sea is rarely mentioned in the conventional story of electricity. Rather than being an afterthought in the application of electricity, the sea has, in some instances, been the perfect venue for first adopters. And in other instances the specific needs of maritime transport have served as drivers for the overall advance of technology.

Consider the story of electric lighting. In 1808, Humphrey Davy demonstrated the first arc light to the Royal Society. Of profound ramifications for humanity, the discovery of the arc-light had been an unintended consequence of Davy’s electrochemical experiments with batteries. For the first time in human history, fire was no longer the only source of artificial lighting. But because of the inherent inadequacies of batteries, the practical use of arc-lighting would not occur for nearly six decades until the appearance of suitable electric generators. The story of lighting, as usually told, then goes on to relate how the arc-light found its earliest use in theatres and in the illumination of city streets. Rarely, however, does this narrative explain that before dazzling urban dwellers, arc lighting was pointed toward the sea.

With the economic growth of the Industrial Revolution accelerating during the 19th century, the number of people and the volume of goods that were moved around the world by ships expanded at a phenomenal pace. As maritime commerce grew so did the disasters at sea. The thousands of shipwrecks represented many lives lost and great economic losses. The greatest danger for ships did not reside in the high seas. Being close to a shore when night, fog, or a storm could easily conceal the existence of dangerous rocks, shoals, and reefs was, and still is, the sailor’s greatest fear. Lighthouses offered mariners rays of salvation.

Concerned about the higher risks to life and property, the world’s major maritime nations of the 19th century expanded the number of lighthouses. Upper most in the minds of those who oversaw lighthouses was the effectiveness of the light signal. A good deal of effort was devoted to improving illumination produced by oil- and gas-lamps. Capable of penetrating deeper into the night and fog, the arc-light offered an important advance in lighthouse design. In 1860, British lighthouse authorities asked Michael Faraday to explore the use electricity in lighthouses. That same year, Faraday proclaimed to the Royal Institution, “The use of light to guide the mariner … has…caused such a necessity for means more and more perfect as to tax the utmost powers both of the philosopher and practical man in the development of the principles concerned, and their practical applications.” During the early 1860s, Britain and France installed the first electric lighthouses — a decade before arc-lighting appeared in the British and French urban landscape and a little longer before it appeared on U.S. city streets. When consideration was given to building America’s first electric lighthouse, an 1882 report to the U.S. Congress made it clear that “there [could] be no better place to adapt [electricity] to our light-house service than at Hell Gate, in New York. … At present, sailing vessels approaching the Gate at night are compelled to anchor until morning; and in consequence of this, daybreak, when the large Sound steamers come in the harbor, the channel is filled with sailing craft, and the dangers of collision accordingly increased. The electric light of Hell Gate will avoid this blockade, with its risks.”

The regulator used in the La Have, Nova Scotia, lighthouse maintained the optimal distance between the tips of the carbon rods in the arc-light. Though arc-lighting provided a more powerful beam, its widespread diffusion into lighthouse design did not follow. By the start of the 20th century, there were thousands of lighthouses around the world but only about 30 used an electric light. France had twelve, Britain six, and the U.S. two. All the rest still used oil or gas lighting. According to Michael Schiffer, an archaeologist who has studied the history of the electric lighthouses, the failure of the more advanced technology is an excellent illustration of the multidimensional considerations needed to explain technological diffusion, or lack thereof. The imperative of marine safety may have provoked the earliest adoption of arc-lighting, but it could not sustain widespread adoption. The story of wireless telegraphy, on the other hand, is quite a different story.

At the start of the 20th century, ship-to-ship and ship-to-shore communications were very limited. Written messages could be physically transported, but that was extremely slow. The semaphore offered much faster communications but the sender and receiver had to be within visual range. The revolution of electrical telegraphy, which had started in the first half of the 19th century, had transformed terrestrial communications. Marine communications, however, still remained primitive. Submarine telegraph cables spanning the ocean’s of the world could link far flung lands, but no electrical technology existed that allowed ships to communicate. The mobility of ships does not lend itself to wires.

Edison proposed wireless telegraphy to meet the special needs of seafaring. In an 1885 patent application, Edison underscored the importance to safety if ships could communicate through dense fog by means of wireless telegraphy. Ships not only could crash on rocks hidden by dense fog, they could easily collide into each other as they came closer to shore. Ship-to-ship communication through the thick fog would have been heaven sent. Based on electrostatic induction, Edison’s patent did not offer a realistic solution to maritime communication. His patent, nevertheless, did lay claim to the idea of an aerial antenna whose rights Marconi felt compelled to buy in 1903.

Much is written about Marconi’s great breakthrough: the transmission and reception of a wireless telegraphic signal across the Atlantic Ocean on 12 December 1901. This achievement is all too often portrayed as the pivotal point which brought radio communications to the public consciousness and gave a critical, and much needed, boost to Marconi’s business ambitions. It would take many years before wireless transatlantic telegraphy could compete against the existing submarine cables. However, years before any transatlantic transmission had been proven, the navies of the major power at the world saw the strategic importance of ship-to-ship and ship-to-shore wireless communications. As early as 1891, Captain Henry Jackson, who was later to become First Sea Lord of the British Admiralty, sent wireless Morse code signals over a few hundred yards. Britain’s Royal Navy was the leader. Not only did it work closely with Marconi, the Royal Navy also set up its own wireless R&D group in 1897, within the Torpedo Branch. In 1899, wireless telegraphy was used for the first time in naval maneuvers. With a number of ships in a fleet using wireless telegraphy, naval applications first challenged engineers to solve the problems of interference. With wireless communications, navies were the first contend with the need to encrypt wireless messages, to prevent jamming, and to spot counterfeited messages. The British Navy developed 3 channel systems for wireless communications. In his historical study, “Electronics and sea Power.” Vice-Admiral Sir Arthur Hezlet concluded that by 1905, “there is little doubt that from every point of view the Royal Navy at this time had the most efficient wireless communication system in the world … and produced the best material.”

The sea not only provided an early push for wireless innovation, but it also provided the Marconi Company with a sizable and vital revenue stream. By 1905, the world’s naval powers had 110 ships equipped with wireless telegraphy, many of which were equipped with Marconi equipment. In 1904, Marconi entered into an agreement with the Cunard Steamship Line to create the first civilian ship-to-shore communication system. The Titanic sailed with a Marconi wireless system. In the aftermath of this great tragedy regulations for the use of wireless at sea were proposed for the first time. In Britain it was recommended that all ships be equipped with wireless equipment. But equally important that they be staffed by trained operators on a 24 hour basis. The prospect of the world’s ships carrying wireless equipment was of enormous commercial potential for Marconi.

This article has given a sketchy overview of two examples that illustrate the historic relationship between IEEE technologies and the sea. There are several more that come to my mind. If any of you have other examples please share them with me and the IEEE History Center.

Elliot, Major George H., Report of a Tour of Inspection of European Light-House Establishments Made in 1873, under authority for the U.S. Secretary of the Treasury, (Washington, D.C: Government Printing Office, 1874)

Retrieved from "https://ethw.org/w/index.php?title=The_Sea_and_Early_Electrical_Technology&oldid=174696"
Categories:
This page was last edited on 1 April 2019, at 20:14.
About ETHW
Policies and disclaimers