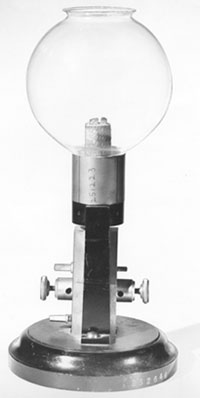 This Jablochkoff “electric candle” arc lamp from about 1878 is one of the earliest electric lamps. The “candle” made light by passing an electric current between two carbon rods. These rods were mounted vertically, side-by-side in the center of the lamp. They were maintained at a precise distance from each other by a wax separator that evaporated as the carbons burned down (only the remnant stubs are visible here). Jablochkoff candles operated only on alternating current, with the power leads attached to the connectors seen on either side of the base. Courtesy: Smithsonian Institution. 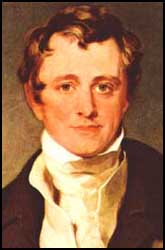 Electric “arc” lighting refers to the fact that an electric spark in the air between two conductors will produce a dazzlingly bright light. Many early experimenters noted this phenomenon, and Sir Humphrey Davy made a famous demonstration of it in 1809. Some considered using the arc as a source of light for streets, theaters, or other spaces, but as long as the only source of electricity was the battery, these ideas were not practical, because the arc uses a great deal of current. The short life of the battery in this system meant that it had to be replaced quite often. 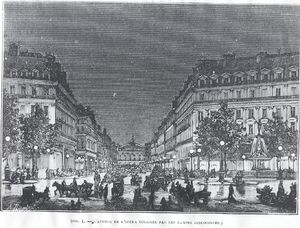 When the generator became available in the 1840s, the idea of arc lighting returned. The first practical installation was at the South Foreland lighthouse in England in 1858. By the 1870s there were dozens of different arc lighting generators and lamps on the market. One of the most famous lamps was the Jablochkoff candle invented in 1870 by Russian inventor Pavel Nikolayevich Yablochkov. It solved a problem seen in all arc lamps, which was that the white-hot arc tended to quickly eat away the electrodes until they were too far apart for the arc to leap across the gap. The Jablochkoff candle used two parallel carbon rods that were designed to provide a long service life. In June 1878, as part of the Exposition Universelle, arc lighting (using Jabkochkoff candles) of the Avenue de l'Opera and the Place de l'Opera was switched on for the first time, marking a milestone in public awareness and excitement about the technology.  However, the street lighting systems installed in the United States and Europe usually required regular maintenance (usually daily adjustment) by an army of technicians.

The intensely bright light created by the arc lamp was great for lighting the outdoors, but it was not good for inside. That is part of the reason why Edison began his experiments with an incandescent lamp, where electricity heats a wire instead of making a spark. Edison’s early notes on his experiments mentioned the idea of “subdividing” the bright light of the arc into smaller portions that were easier on the eyes. However, arc lights continued to be used for outdoor lighting, searchlights, lighthouses, stadium lights, and other high-intensity light sources. Arc lamps could still be seen on the streets of London as late as the 1950s, but for most applications they have been replaced by more efficient forms of incandescent bulbs. The fluorescent lamps used in homes and offices are a form of arc lamp where the arc crosses a long gap and its passage is aided by the presence of ions. Today, other special forms of arc lighting have been developed, such as the lamps used for the “flash” in cameras, the light sources for motion picture theater projects, and the ultraviolet lamps used in the manufacture of integrated circuits.

Retrieved from "https://ethw.org/w/index.php?title=Arc_Lighting&oldid=157276"
Category:
This page was last edited on 23 November 2017, at 06:41.
About ETHW
Policies and disclaimers