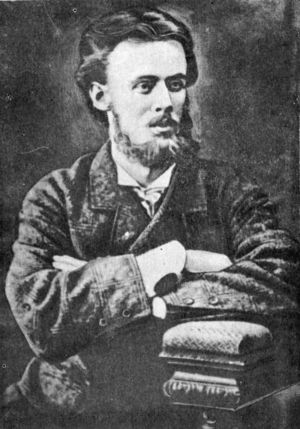 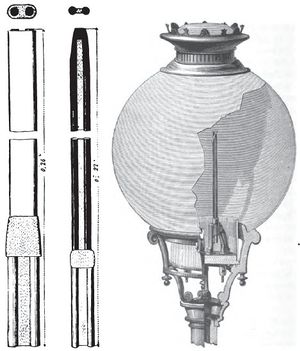 The Yablochkov Candle. L-R: The 1876 Candle, the 1878 Candle, a globe unit containing a candle 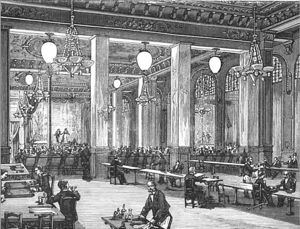 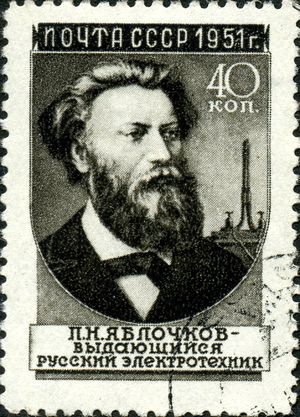 Electric lighting was one of the most profound technological advancements of the 19th century. Early demonstrations of arc lighting were made in 1809 by Sir Humphrey Davy. However, it was not introduced commercially until the latter half of the 1800s. The 1870s saw pioneering work on dynamos by William State and Charles Brush. In 1876, using the dynamo as a power source, Pavel Yablochov invented the the Yablochkov Candle (often spelled Jablochkoff Candle), the earliest commercially successful arc lamp . The Yablochkov Candle improved on previous arc light designs and made the installation of electric lighting economically feasible. Its popularity and success influenced many inventors, including Thomas Edison, and was a major step towards electric lighting being fully integrated into the home.

Pavel Nikolayevich Yablochkov was born on 14 September 1847 to Nikolai Pavlovich and Elizaveta in Serdobsky, an impoverished village in the Saratov region of the Russian Empire. Yablochkov showed an interested in science and engineering at an early age and, while still a youth, invented a goniometer which was used for land surveys conducted by neighboring villages. After privately studying at a boarding school with military engineer César Antonovich Cui, Yablochkov was accepted to the Nikolayev Engineering Institute (now the Military Engineering Technical University) on 30September 1863. After receiving a rigorous military education from the famous St. Petersburg University, Yablochkov graduated in August 1866 with the rank of Lieutenant Engineer in the Russian Army, and was appointed a junior officer in the 5th Engineering Battalion stationed at Kiev. After a year at Kiev, Yablochkov temporarily left military service. He returned to the army in 1869, enrolling in the Technical Electroplating Facility in Kronstadt, which was the only military school in Russia which trained its field specialists in electrical engineering. After eight months in training, Yablochkov was appointed head of the galvanic team of the 5th Battalion, where he remained until 1 September 1872. At this point, he was transferred to the reserve and worked on the Moscow-Kursk Railway Telegraph, where he developed various improvements on the telegraph.

Yablochkov became a member of the Moscow Polytechnic Museum, and it was here that he learned about contemporary electric lighting methods. He saw room for improvement on existing arc lighting systems, and his first project in this area was making improvements on the Foucault regulator. This was successfully applied in the Spring of 1874 to power an arc lamp on the running Moscow-Kursk train.

After his work on the Moscow-Kursk Railway, Yablochkov retired from the telegraph service and opened a shop in Moscow, where he and N. Glukhov, an experienced electrical engineer, worked on improving the battery, dynamo and lighting methods. During one of his 1875 experiments on the electrolysis of coal, he accidentally produced a bright arc from two rods in parallel that illuminated his laboratory. The use of these parallel rods provided the foundation and inspiration for his improvements to the arc lamp, which eventually became the Yablochkov Candle.

By the Autumn of 1875, Yablochkov had moved to Paris where he entered the employ of Louis Francois Clément-Breguet, a famous academic. Under Breguet, Yablochkov continued his work on arc lighting, and on 23 March 1876, he was awarded French patent # 112,024 for his electric candle. The first public exhibition of the candle was in London on 15 April 1876. It enjoyed immediate success and popularity. The candle employed a design of parallel carbon rods, which differed from previous arc lamps, where carbon rods faced each other point to point. Yablockhov’s design caused the candle to last far longer than previous arc lamps, which typically lasted for only a few moments before burning out. In contrast, the Yablochkov candle could burn for an average of one and a half hours in a lamp before the candle had to be replaced.

The candles rapidly increased in popularity as another exhibition was held in London on 17 June 1877. Their first commercial use was at the Louvre in October 1877. Units were sold in many European countries including Belgium, Spain, Portugal, Sweden and Greece, as well as in cities on other continents including Rio de Janiero, Mexico City, New Delhi, Calcutta, and Madras. The Shah of Persia and the King of Cambodia used the candles for illuminating their palaces. At the height of the candle’s popularity, the Breguet company produced 8,000 of the candles per day. Through 1877 and 1878, Yablochkov continued to work on improvements for his lighting system, which included the development of an alternating current generator, an AC transformer, and systems of electric lights based on capacitors and transformers that could allow multiple candles to be lit with one generator. The most famous demonstration of the Yablochkov candle was the Paris Exhibition of 1878, held from 1 May to 10 November. Sixty-four arc lamps were installed on Avenue de l'Opéra, Place du Théâtre Francais and around the Place de l'Opéra. The huge success of the candles was instrumental in bringing electric lighting into the public eye.

After selling his patents to a French company, Yablochkov returned to Russia in late 1878. He was greeted enthusiastically as a hero, and with the financial assistance from General-Admiral Konstantin Nikolayevich and composer Nikolai Rubinstein as well as many other famous Russians, he formed his own company, “Association of Electric Lighting P.N. Yablochkov Inventor and Co.” in 1879. He enjoyed some success installing arc lighting systems at military district courts and the Okhta Powder Works in St. Petersburg. Yablochkov returned to Paris in 1880 in preparation for the first International Electrotechnical Exhibition, which opened on 1 August 1881. This exhibition focused, however, on the incandescent lamps developed by Thomas Edison which could run for up to one thousand hours without having to be replaced. While Yablochkov was recognized at the exhibition as a pioneer and innovator, his contributions had already fallen into obsolescence.

After the 1881 exhibition, Yablochkov enjoyed little success. After a period of deteriorating health and financial difficulties, he returned to St. Petersburg in 1892 with little of his fortune. He desired to return to the region where his parents were raised, and relocated to the country in the Caucasus, but found it inadequate for doing scientific research. Yablochkov returned to his home province of Saratov in late 1893, and set up an office where he worked on plans for lighting Saratov. However, his health rapidly deteriorated and he died on 31 March 1894. Yablochkov was buried in the village of Sapozhok (now Rtischevskogo district) in the Church of Archangel Michael.

In the 20th century, Yablochkov was recognized as a Russian national hero. The church which housed his burial site was destroyed in the late 1930s, so in 1947, to commemorate the 100th anniversary of his birth, Sergey Ivanovich Vavilov, then president of the USSR Academy of Sciences, attempted to locate the exact grave site. By interviewing village elders and reviewing archival records he arrived at a probable location, and a monument was erected on this site on 26 October 1952. In 1951, the USSR issued commemorative postage stamp celebrating his achievements, and commemorative artwork followed in 1987 and 1997. Streets in Moscow, St. Petersburg, Saratov, Serdobsk as well as many other Russian cities bear his name. While Yablochkov isn’t a household name outside of Russia in the same way that Edison is, his influence on electrical engineering was massive and his contributions to the field revolutionized the way we see our world.

Retrieved from "https://ethw.org/w/index.php?title=Pavel_Nikolayevich_Yablochkov&oldid=146810"
Categories:
This page was last edited on 16 February 2016, at 15:52.
About ETHW
Policies and disclaimers