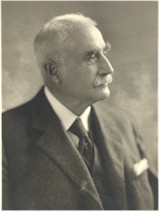 Charles Francis Brush, an American pioneer in the commercial development of electricity, was born 17 March 1849, on his parents' farm in Euclid, Ohio, about ten miles east of Cleveland. While still at school, he became intensely interested in electrical apparatus. He developed an interest in science and electricity at an early age, building his first static electric machine at age twelve. Brush's parents realized that Charles would benefit greatly from a good education and they made the financial sacrifice to send him to Cleveland's Central High School. It was there that Brush fulfilled his boyhood dream of constructing an arc light. He graduated from Central High in 1867 with honors. An uncle of Charles' from his mother's side of the family provided a loan which enabled him to continue his education at the University of Michigan, from where he graduated in June 1869 at the age of twenty, later securing the degree of M.S. at this university. Brush later earned a Ph.D. from the Western Reserve University, Cleveland.

After graduation, Brush returned to Cleveland where he established himself as an analytical and consulting chemist. Around 1873 he became reacquainted with a boyhood friend, George Stockly, who was vice president and general manager of the Telegraph Supply Company of Cleveland. Brush related some of his early experimentation with electricity to Stockly and discussed his vision for the development of arc lighting. The lighting system would need an efficient means of generating electricity. One of the first to realize the value of the work of Gramme, Brush proposed to do by using a dynamo. Stockly was very impressed with Brush and his ideas and agreed to financially support his effort to construct a small dynamo. Brush assembled his first dynamo in the summer of 1876 while "vacationing" at his parents' farm. The following year he introduced the compound field winding for obtaining constant voltage. He used a horse-drawn treadmill to power the dynamo and was able to generate electricity with his new machine. He returned to the Telegraph Supply Company later that summer to continue the development work. These early efforts resulted in U.S. Patent No. 189 997, "Improvement in Magneto-Electric Machines", issued 24 April 1877. 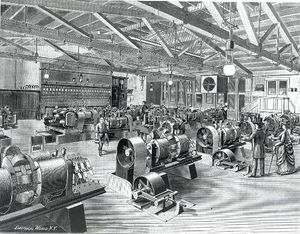 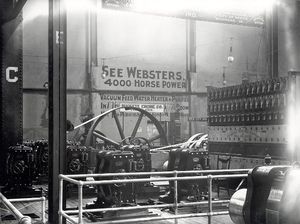 The dynamo provided an economic and efficient source of electricity for the arc light and this was a key factor in developing a commercially viable system of lighting. With a functional dynamo in hand, Brush turned next to developing an arc lamp while simultaneously continuing with development of the dynamo. The arc light was not a new idea but those in existence at the time were not very practical, their chief drawback being the lack of a good regulating system for the carbon electrodes. Brush developed an arc light that was regulated by a combination of electrical and mechanical means, with a simple and easy maintain design. He installed his first commercial arc lamp on the balcony of a doctor's residence in Cincinnati in 1878, and before the end of 1881, Brush arc light systems were illuminating the streets of New York, Boston, Philadelphia, Baltimore, Montreal, Buffalo, San Francisco, and other cities.

In order to keep pace with the rapidly increasing demand for Brush lighting systems, the Telegraph Supply Company of Cleveland underwent significant restructuring, giving birth to the Brush Electric Company in the summer of 1880.

In 1881, the Brush Electric Company was incorporated and capitalized at $3,000,000, being absorbed ten years later by the General Electric Company, when the works were removed to Schenectady, New York. Brush continued to develop much other apparatus, and contributed great improvement in the manufacture of storage batteries. He was a charter member of the Institute; he served in 1884-87 as one of the AIEE's first managers, and was a member of the Edison Medal committee at the time of his death.

Brush was a charter member of the AIEE and in 1913, he was awarded the AIEE Edison Medal "For meritorious achievements in invention and development of the series arc lighting system." He passed away on 15 June 1929. On that date, his name was being voted upon for honorary membership in the Institute, and this distinction was conferred upon him by the board of directors ten days after his death.

Retrieved from "https://ethw.org/w/index.php?title=Charles_F._Brush&oldid=178332"
Categories:
This page was last edited on 19 February 2020, at 16:31.
About ETHW
Policies and disclaimers