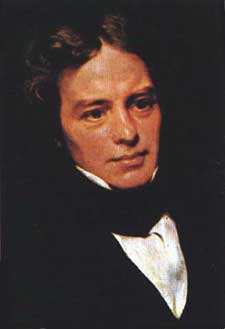 To say that Michael Faraday is a giant in the history of science, and particularly in the history of electrical engineering, would actually be an understatement. A British physicist and chemist, Faraday discovered, among other things, the laws of electrolysis, electromagnetic induction (1831), hydroelectricity (1843), the relationship between electricity and gravity (1851), and atmospheric magnetism (1851).

Of all of these, electromagnetic induction was the most important. Without it power generation and power transmission would be impossible and the world we live in vastly different. Once Faraday discovered the principle of electromagnetism he was able to build the first electric motor, followed shortly after by the first generator and the first transformer. In 1832 Faraday demonstrated that three types of electricity thought to be different—that induced from a magnet, electricity produced by a battery, and static electricity—were in fact all the same. This led to great breakthroughs in electrical engineering. Faraday also introduced several words into our electricity vocabulary. These include ion, electrode, cathode, and anode. So powerful was his influence in the scientific arena that a unit of measurement—the “farad”—was named in his honor. The farad is the unit of measurement used for measuring capacitance. Capacitance is the capability of a device to store an electric charge.

Clearly, Faraday was a great scientist, but far from being the kind of scientist who locked himself in his laboratory day after day, having little contact with the outside world, Faraday brought his science to the people. In 1826 Faraday founded the Friday Evening Discourses and in the same year the Christmas Lectures for young people at the Royal Institution. Both were enormously famous and attended by hundreds of people, including such celebrities as writer Charles Dickens. Faraday was a gifted speaker and made complex science understandable to common, everyday people. In total Faraday gave 123 Friday Evening Discourses between 1826 and 1862 and 19 Christmas lectures between 1827 and 1861. These Christmas lectures were aimed at children. One of these lectures, titled The Chemical History of a Candle, was published in Faraday’s twilight years and became an instant classic. It remains a classic of scientific literature.

In 1923 the Institution of Electrical Engineers (IEE) in the United Kingdom reestablished the Faraday Lecture series to continue Faraday’s mission of bringing science to the masses, especially children. Each year, a leading organization in the field of electronics is invited by the IEE to present the Faraday Lecture in commemoration of the work of Faraday. Such famous individuals as Sir David Attenborough and Carl Sagan have given Faraday Lectures. Faraday was born on 22 September 1791 in England and lived his whole life there before dying on 25 August 1867.

Michael Faraday, Chemical Manipulation: Being Instructions to Students in Chemistry, on the Methods of Performing Experiments of Demonstration Or of Research, with Accuracy and Success (1827).

________, Chemical Manipulation: Being Instructions to Students in Chemistry, on the Methods of Performing Experiments of Demonstration Or of Research, with Accuracy and Success, New Edition (1830).

________, Chemical Manipulation: Being Instructions to Students in Chemistry, on the Methods of Performing Experiments of Demonstration Or of Research, with Accuracy and Success, 3rd Edition, revised (1842).

Retrieved from "https://ethw.org/w/index.php?title=Michael_Faraday&oldid=181538"
Categories:
This page was last edited on 18 September 2020, at 16:34.
About ETHW
Policies and disclaimers