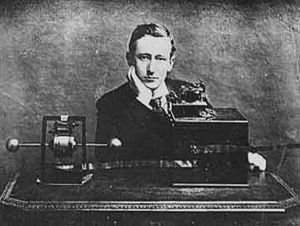 Marconi was born in Italy in 1874 to Giuseppe and Annie Jameson Marconi. His father was a prosperous Italian landowner and his mother was from a wealthy Irish family of whiskey distillers. Because Marconi applied himself only in the subjects that he was fascinated by--physics and chemistry--he dropped out of several schools and was largely educated by private tutors in at the family's residences in Livorno and Bologna, Italy. In 1894, after reading articles about electromagnetic, or radio, waves, and Heinrich Hertz's death, he began thinking about building a device to transmit long and short bursts of radio waves over long distances. He understood that this method of communication would be faster than telegraphy and less cumbersome because no wires would be involved.

His parents let him use the upper floor of their Bologna home, Villa Griffone, as a laboratory. Over the summer and fall of 1895, Marconi duplicated Hertz’s short-range experiments and then succeeded in sending signals over longer distances he took his ideas and equipment to London, where William Preece, chief engineer of the British Post Office, supported his continuing experiments and demonstrations. Marconi eventually raised money privately and established the Wireless Telegraph and Signal Company in London.

By 1899 Marconi was constructing wireless stations on both sides of the English Channel and in 1901 he installed transmitters powerful enough to send messages across the Atlantic. The following year he established a company in New York. He lived a transatlantic existence, working in both Europe and the United States.

Marconi was widely recognized for his work in his own time. In 1909 he was awarded the Nobel Prize in Physics. Grateful Titanic survivors presented him with a gold medal in recognition of his work in radio, which helped save their lives in the 1912 disaster. Marconi and his wireless stations were illustrated on dozens of different cards sold with packs of cigarettes, and he had at least two brands of cigars named after him.

Unlike many other radio pioneers, Marconi was a savvy businessman. He went to great lengths to control his own patents as well as those of others in the field. By 1912 the Marconi Company essentially controlled the global wireless communications industry. This virtual monopoly led to corruption charges in the effort to build communications networks across Europe.

Having a longtime passion for the sea and the intellectual solitude that it offered, in 1919 Marconi bought a yacht and renamed it Elettra ("Amber," a natural spark generator). A state-of-the-art floating laboratory, Elettra became the site of his research breakthrough in the early 1920s on shortwave, or high frequency, radio transmission. This finally made long-distance wireless commercially competitive with cable telegraphy and greatly expanded the communications capacity of the earth's electromagnetic spectrum. Besides his research, Marconi also hosted many parties aboard the ship, with guests ranging from laboratory assistants to royalty.

In addition to his scientific and business interests, Marconi retained his loyalty to his native country, establishing wireless networks in Italy's imperial expansion in Libya in 1911-12, and serving militarily and politically during World War I. He undertook many diplomatic missions as a government representative, serving as a member of the Italian War Commission to the U.S. Government and delegate to the Peace Conference in Paris in 1919. In 1923 he became a member of Benito Mussolini's Fascist Party in 1923, which he supported for the rest of his life.

Marconi died in 1937. The day after his death wireless operators and broadcasters around the world shut down their transmitters for two minutes of global radio silence.

Marconi was elected an honorary member of the Institute of Radio Engineers, one of IEEE's precursors, on August 14, 1917. Among the many honors he received were the Nobel Prize for physics in 1909; the Albert Medal of the Royal Society of Arts; and the 1932 Kelvin Medal of the Institution of Civil Engineers. The Italian government decorated him with the Italian order of St. Maurice and St. Lazarus and the Grand Cross of the Crown of Italy. In 1915 he was nominated Senatore of the Kingdom of Italy. In the United States, he received the Franklin Institute's Franklin medal, the American Association of Engineering Societies' John Fritz medal, and the Medal of Honor of the Institute of Radio Engineers.

Marc Raboy, Marconi: The Man Who Networked the World (2016).

Retrieved from "https://ethw.org/w/index.php?title=Guglielmo_Marconi&oldid=182004"
Categories:
This page was last edited on 28 October 2020, at 01:51.
About ETHW
Policies and disclaimers