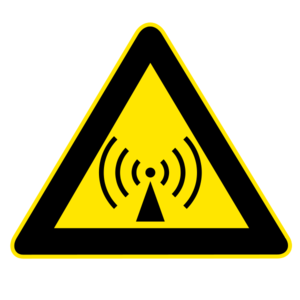 Animated diagram representing the difference between radio waves modulated by amplitude and by frequency.

A wave is characterized by its wavelength—the distance from one crest to the next—and by its frequency—the number of crests per second. For any wave, the product of wavelength and frequency equals the speed of the wave. When electromagnetic waves have wavelengths in the range from 400 nanometers to 700 nanometers,(a nanometer is one billionth of a meter) they are visible to humans and are known as light. When electromagnetic waves have other wavelengths, they are known by other names, such as x-rays, ultraviolets rays, microwaves, and radio waves. Thus, the definition of light is given by human physiology, but the other divisions of the electromagnetic spectrum are more arbitrary. The full range of wavelengths is known as the electromagnetic spectrum.

Radio waves may be used to carry information, such as speech or music because they vary in frequency. The radio waves we are most familiar with are those used in radio broadcasting and are divided into two types: amplitude modulation (AM) and frequency modulation (FM). AM stations use radio waves from 550 kilohertz to 1600 kilohertz, so the radio dial runs from 550 to 1600. FM stations use radio waves from 88 megahertz to 108 megahertz, so the dial runs from 88 to 108. Radio waves are used for many other purposes, like television broadcasting, radio navigation, and mobile communications.

Retrieved from "https://ethw.org/w/index.php?title=Radio_Waves&oldid=120292"
Categories:
This page was last edited on 28 September 2015, at 19:02.
About ETHW
Policies and disclaimers