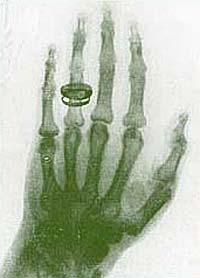 An x-ray of the left hand of Wilhelm Röntgen’s wife. This 1895 x-ray is the first ever taken of the human body. 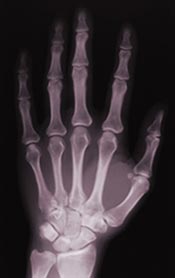 A modern x-ray of a left hand. Note the improved level of detail and clarity.

If you ever suffered a broken a bone or had a thorough dental exam you have undoubtedly been subjected to an x-ray machine. X-raying is a way of taking pictures of your insides and bones through your clothes and skin. This technology lessens the need of exploratory surgery and makes diagnosis and treatment of an injuries and disease faster and safer.

X-rays themselves were discovered in 1896 by German physicist Wilhelm Röntgen. Like many other scientists working at the time Röntgen was studying cathode rays. Scientists had been experimenting with cathode rays since the mid 19th century when it was discovered that an electric charge could flow through a vacuum (usually a glass vessel from which almost all the air had been removed) from one conductor, called an electrode, to another. When the electric charge flowed it appeared that radiation emanated from the negatively charged electrode, called the cathode, toward the positively charged electrode, the anode. This was the cathode ray. Scientists discovered that cathode rays could be used to cast shadows and that they could be bent by magnets.

One day Röntgen noticed that when he was producing cathode rays a mineral (barium platinocyanide) elsewhere in his laboratory gave off light. He hypothesized that the cathode rays were somehow producing an invisible radiation that, when it struck that particular mineral, caused it to emit light.

Röntgen didn’t realize it at the time, but that invisible radiation was a type of electromagnetic wave. We can see light waves and we can feel certain other kinds of waves as heat, such as infrared and microwaves. The radiation Röntgen discovered could neither be seen nor felt, but it was there. It gradually became clear that what was happening was that in a cathode-ray tube, electrons, emitted by the cathode, gained speed and struck the anode, releasing their energy as electromagnetic waves. These waves were similar to light waves, but of a much shorter wavelength (one millionth of a centimeter to one ten-billionth of a centimeter). Rontgen found that these waves seemed to pass through materials, such as paper and wood. He also found that they affected photographic film. This meant that he could obtain images of dense materials surrounded by less dense materials, such as bones surrounded by soft tissues.

Röntgen’s x-ray was a major medical breakthrough and was immediately put to work by doctors who used them to diagnose illness and kill harmful tissues, such as cancers. The use of x-rays spread quickly around the globe and in the first decades of the 20th century x-ray machines became standard equipment in hospitals. During wartime, mobile units were placed in the field near battlefields. Many lives were saved by quick diagnosis by x-ray. By the 1950s, however, x-rays were often overused. Some shoe stores even x-rayed feet as a way of measuring shoe size. Gradually it became clear that the power of the x-ray was to be taken seriously—x-rays can damage living tissue. As awareness of the potential danger of overexposure to x-ray radiation grew, use of x-raying became limited to medical situations and precautions, such as the lead apron you wear at the dentist’s, were taken.